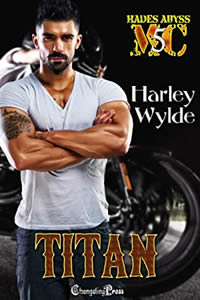 Delilah is the baby in her family and no one will let her forget it. It is time she breaks away and she moves to live with her friend near the Hades Abyss MC compound. She gets an admittedly insane job as a web sex worker but what probably sets her aside from the rest is she has never with been a man. Little does she know there is one man watching who will keep her to himself.

Titan is the president of his MC and he leads a life on the edge, until Delilah. When he sees Delilah the first time, he knows she is meant to be his and no one will see her passion but him, and he makes sure it will never happen. Once he has her, he will never let her go.

Titan may be the president of his MC, but there is another who wishes to take Delilah for his own dirty deeds; someone her own flesh and blood sold her to. He will get his woman back, and when he does, those who took her will pay. What they do not know is they took his wife and unborn baby who are his whole future and he will not fail.

I love Delilah because this woman is going to do what she wants in life even if it means cutting her family off and moving far away. I found her family interesting and enjoyed when Titan stood up for Delilah. The romance is hot because once Titan has Delilah in his site, he fights for her. The writing of Ms. Wylde is wonderful because she builds a whole world for her MC’s and they are all connected. Each story is a standalone story, but be warned once you get started you will find yourself addicted to her release days. I highly recommend Titan and Delilah’s story and the talented writing of Ms. Wylde.