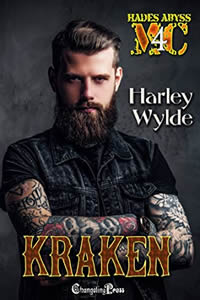 Phoebe started life with a family she thought loved her, but really sold her down the river for money. When Kraken enters her life she just knows he is another man out to cause her pain, but instead he wants to be her and her baby’s savior. Can she trust a man in a club, or is he just like the men who hold her hostage?

Kraken is on a mission for his president, but he does not like living in the dark or dealing with trash. When he sees Phoebe he knows she is far too innocent to be where she is and offers her away out by becoming his.

Phoebe knows it is to good to be true and when her tormentors come after her she knows she must go to keep her baby, Kraken, and his club safe. Kraken promised to protect the woman he loves, but now she is gone and someone is going to pay. Can Phoebe overcome her new fear and pain, or will she give up on surviving? Can Kraken help her see the beauty he sees inside her is what he loves the most and her physical beauty is just icing on the cake?

Phoebe is such a strong character and she steals the reader’s heart because anyone who can live through hell and find a new life is amazing. The pain and suffering is portrayed strongly by Ms Wylde and leaves the reader feeling every offense experienced. Kraken was the perfect man to rescue Phoebe because from the moment he met her he knew and fully accepted her baby as his. I was impressed by the characterization of MC members because despite the ability to kill when necessary, the MC members were just men and protectors of the innocent. It is the writing of Ms. Wylde which creates a realistic world where a person would want to become a member of a family when so many have no family of their own. I love the writing of Ms. Wylde and Kraken is another homerun; one I recommend no one miss with the warning that once you get started you will be hooked for life.