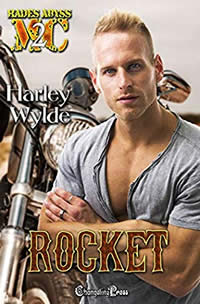 Violeta has lived the life which anyone would call a nightmare. Her father was a bad man and after making a deal, he sends her to another country and group of men she fears will be as bad or worse than the last. When a blond giant puts her on the back of his bike, she is afraid she is in for more abuse until she realizes he is not the monster she is used to.

Rocket is shocked and appalled when a teenage girl offers herself to him and all he can think to do is run. Violeta is beautiful and scarred emotionally and physically by the past she was forced to live and he hopes one day she can find happiness. The only problem is, he wants her happiness to be with him.

Violeta decides that now she is legal, Rocket will be hers. When Rocket resists, she makes him see there is no happiness without her. When the past comes calling will Violeta be strong enough to survive more ugliness?

Rocket is such an honorable man which some make think is an oxymoron for a biker, but the brothers of Hades Abyss are a whole different breed of bikers. I think the characters and Hades Abyss world are developed superbly to give the reader a clear understand of the MC life and the concept that monsters may wear suits and the saviors wear leather. Violeta is more than she thinks, and the reader gets to witness her rise from the ashes. Rocket and Violeta’s story is one no romantic and MC fan should miss.