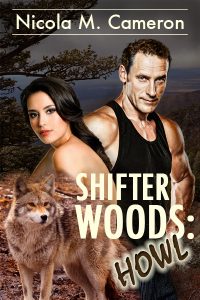 Laurie Rivera is an investigative reporter at an Albuquerque newspaper. She is also a coyote shifter on the run from her California pack and the mate that was chosen for her. She wanted an education and a career, not just a husband and a litter of pups.

Caleb Lynch is the MacComber Sheriff and Alpha of the local coyote pack. He is a widower and does not believe that there is another mate for him.

Laurie and her photographer are hot on the trail of a story that could make their careers. Women are being kidnapped, drugged, and forced into prostitution at truck stops and rest areas in New Mexico. They find the kidnappers but are discovered and forced to flee into an ice storm. Laurie is rescued by the local sheriff. He is exactly what she has been avoiding since she ran away from her home; an alpha coyote and her mate.

I really enjoyed this story. Laurie and Caleb are intriguing characters. Neither is in the market for a mate, but the chemistry between the two is undeniable. Both the romance and suspense aspects of the story are well developed and totally absorbing. The characters are well written and multilayered. The only fault I could find was that the subplot of the photographer’s story was underdeveloped. I look forward to reading more of this author’s work.