Feast or Famine by Crymsyn Hart 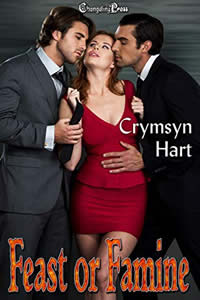 Sadie, Elijah, and Luke have not had the easiest of mating since it is not normal for two alphas to share one female. Once Sadie was turned, she became something more than the average wolf and would need more from her mate or mates than the average wolf. None of them could have ever believed a ghost from the past would appear and change their world.

Grey has no idea why he felt the need to follow the beat of the drum, but he went were it led. When he arrives at his destination, he discovers the female who is his mate already mated to two alphas and he wonders where he will fit in. Little does he know he has a special place both past and present and all he had forgotten will be revealed.

The entire shifter world is in danger of extinction. Only one can save them all and Sadie became something more when she was changed. Being the savior when you barely know who you are is scary, but time has run out and Sadie must step up and save them all. Will her mates learn to love her together, or will the division cause all shifters to fall?

The writing of Ms Hart is enthralling but in the case of Feast or Famine I was a little lost in the story. I felt I was dropped in the middle of a movie and spent time trying to figure out the story and where each character fit. I loved the story-line and the character-building aspect of the writing; I just wish I knew the back story so I can spend more time enjoying the story instead of trying to catch up. The story is amazing in the writing and unique world created for the interesting characters to fit perfectly into. I would recommend reading the other books in the series before reading the third book, but if they are half as interesting as this installment of the story they will be worth the read.