A Witch In Time by Catherine Kean & Wynter Daniels 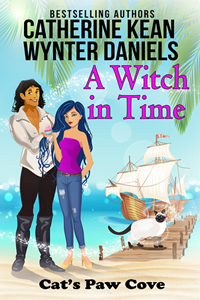 In present day, Luna owns and operates a bakery in the town of Cat’s Paw Cove that also rescues & re-homes stray cats. She has a black cat named Hecate, is single, has a brother who stays with her on and off, and oh yeah, she is a witch. The town is having the Grand Opening of the restored ship the Guinevere/Shipwreck Museum to coincide with their Founder’s Day celebrations. Before going to the celebrations, she casts a protection spell to keep single guys away because her last couple of failed relationships were with guys she met at previous Founder’s Day celebrations.

In 1645, Colin is leaving England for Barbados with his wife and unborn child to escape debt collectors from Colin’s late father. He thinks a fresh start in a new place will allow him to take care of his family and make a living with his inventions, which he has hidden in a secret compartment on board the Guinevere. When a fierce storm blows in, Colin tries to get to his wife and some of the other women passengers, but the storm starts tearing the ship apart and he is separated from everyone and goes overboard. He remembers helping a female passenger on to a piece of wood and then is hit on the head. The next thing he knows, he is waking up on a beach and there is a woman with blue hair coming toward him.

Luna is not interested in a relationship with any man right now. Colin wants to find a way to get back to his wife and child, but neither one can deny how attractive they find the other. Luna takes Colin to the medical tent on the beach to have his head wound tended to. The blood pressure monitor scares him a bit, but he lets the nurse take care of him. Afterwards, she takes him back to her house and runs him a bath and gives him a change of clothes from her brother’s stash, and feeds him. They both come to terms that somehow Colin has traveled through time. Jordan, one of Luna’s coworkers who can talk to cats, brings back an escaped Hecate and tells Luna the cat’s secret power is finding portals through time.

From the first few words, I knew I would like this story. Cats with magical powers and a hunky British guy, who could resist? Luna and Colin are both extremely likable characters and I truly wish the book was longer and delved more into what happens next. I would love to have more of even the minor characters Jordan, Luna’s brother Leo and their significant others. Even Hecate’s story would be interesting since she is “magical” and a descendant of one of the cats who had been on board the Guinevere.