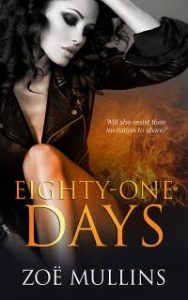 Welcome, today we are talking with Zoë Mullins! I would like to thank you for taking time out of your busy writing schedule to answer a few questions.

First, I think it’s important for readers to get a little insight on an author that they don’t necessarily get from your professional bio. You’d be surprised at what readers connect to, and sometimes the simplest ‘I can relate to that’ grabs their interest where nothing else can. Don’t answer anything you feel uncomfortable with.

Can you share a little something about Zoë Mullins that’s not mentioned in your bio on your website?

My father had a job that saw us moving every 6 – 18 months until I was in my early teens. Since I spent most of my childhood moving around and wasn’t the most ‘outgoing’ kid in the world, books were my best friend. As were the stories I began to spin in my head. It certainly fueled my creative spirit.

What are your favorite:

animal – dogs – I have always had dogs. We now have two – Karma, a 2 year old rough collie and Moxie, a 13 year old border collie.

movie – I don’t watch a lot of movies, but I did love Wonder Woman so much that I went back to see it a second time only three days after the first. I’ve never done that before.

TV show – I love TV and have too many favorites to mention. Right now re-watching Gilmore Girls for the fourth time, and Supernatural for the third.

author – again – too many! But I never miss a new Molly Harper. I wish I had her sense of humor.

What are your pet peeves? Can mosquitoes be a pet peeve? We’ve had a wet spring/summer and the mosquitoes have been fierce. They find me too sweet to pass up.

Who is your hero? I can honestly say my husband. He’s also my best friend. No matter what endeavor I’ve taken on, he’s been my biggest fan for more than 20 years.

Give us one thing on your bucket list. A really fabulous European vacation.

What would readers find surprising about you? That I don’t drink wine nearly as often as my social media memes would have you believe.

If you could go to heaven, who would you visit? My mother who passed away before I published my first book but who always encouraged me to write. And my grandmother (my dad’s mother) who was the first fun, fearless woman I ever knew.

What’s the funniest thing that ever happened to you? – This is kind of funny…
we have two dogs and neither like going into the water very much. We’ve had kiddie pools for them, but they won’t go in. I take them to the beach and they want to sniff around the shoreline. So I found this little Finding Dory plastic splashpad at the store and decided to give that a try.

It’s a two-foot round pad with tiny holes and when you plug the hose into it, you get multiple little water jets. As you walk on the pad you can redirect the spray a bit, make them go a little higher or further. So we are out there trying to coax the dogs onto the pad to cool off. We were unsuccessful in getting their interest but my husband and I had great fun playing it, though we likely looked ridiculous!

Now that our readers know a little bit more about Zoë Mullins, let’s get down to the business of Eighty-One Days, which may be available for pre-order at Pride Publishing. September 5th is the release date. How long did it take you from beginning to end before your novel was completely finished, and how did you decide on the topic and title?

I began the story in 2015 as a 6,000 word short story that I submitted to an anthology, but even as I wrote ‘the end’ on the last page, I knew it wasn’t the end. There was a lot more to explore in the story. It didn’t make the final cut for the anthology, so I put it aside, knowing I would come back to it one day.

That day happened early in February of this year. It probably took me about six weeks to edit and revise it. But by the time I sat down at my desk it had been percolating in my brain for two years so I had an idea of where I wanted it to go.

Please tell us a little bit about Eighty-One Days.

Eric and Luke have been best friends since elementary school, but some time over the last twenty years they became more than friends. Luke couldn’t stop Eric from leaving town to pursue his career as a hotshot forest firefighter though.

Jenna is new to town but she’s there at the right time to help Luke pick up the pieces of his broken heart. Luke falls for her hard, convinced that not only is she perfect for him, but she could be perfect for Eric and him. She could be the tie that binds them together. When Eric returns, Luke gets his chance to convince them that a relationship between the three of them is worth taking a chance on.

I think the hardest part was ensuring the heroine got what she needed in the relationship. She’s not a pushover despite wanting to make it work. She pushes back to make sure this is as much about her as it is about them.

There is a playfulness between them. They have fun together outside of the bedroom, and that helps to build the trust and communication they need to make it work once the bedroom door is opened.

I understand your old publisher closed and that you will be re-launching some of your backlist works. Can you give us a little insight on what we can look forward to?

My old publisher closed back in fall 2016 and as scary as that was, it gave me the opportunity to rebrand the first two books in the series I had begun with them.

I self-published those two books – Winning Cait and Tempting Sophie – as Books 1 and 2 in the Men of Steele series, and quickly brought out the third – Finding Dani – in the series. Those are available in ebook format. I also re-released a standalone MMF novella – A Risk Worth Taking – that they had been with my old publisher.

Building from the Men of Steele series, I have recently begun a series of novella (Men of Steele Novellas) that focus on the stories of some of the secondary characters from original series. The first of those novellas – Invitation to Play – was released in June of this year, and the second – Playing It Cool – will be released later before Christmas.

I had a lot of stories in my head and even finished on paper but I couldn’t bring myself to let go of my darlings and submit. My advice – just do it. Just write. Just submit. Just get it out there.What’s the worst that can happen?

Thank you Tory and Coffee Time Romance for this opportunity to talk about my work. I love the opportunity to connect with new readers, and let those current readers know more about what’s next.