Zoraida Grey and the Voodoo Queen by Sorchia DuBois 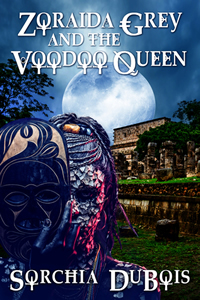 Zoraida Grey is a witch with an interesting Scottish heritage. Things open with her being home, after bringing her grandmother the item she needed and healing from her last excursion that left her broken and bruised and leaving her best friend Zhu behind with the enemy under mind control. She learns surprising family connections to her enemy and is given the task to find her estranged grandfather, Jock, who is the only person who can help rescue Zhu. Her first stop is in Louisiana at a voodoo shop with a mysterious caster who points her to a ship’s captain who might know where he is.

Shea Logan, the sexy yet shifty witch who followed her home and Al Allen the on-again off-again mundane boyfriend both vie for position in her heart. On one hand Shea flirts and seems to want her and then on the other seems to be pushing her to marry Al. Al has been her on again off again boyfriend for years and thought her magic proclivities were just her being eccentric not that she was an actual witch, but says he loves her and is willing to get used to the idea. They both vow to accompany her to find Jock and in turn rescue her friend.

After visiting the voodoo shop in New Orleans they follow the trail to a ship’s captain who is willing to take them to Jock, he just has to take care of a smuggling client first… All Zoraida wants is to rescue Zhu from the clutches of her enemy, but first she has to find Jock. Turns out that Jock’s estranged wife is infamous in the Caribbean as the Black Mamba and has plans to use their daughter in a ritual to gain immortality. In order to gain his help they must save his daughter, brave Caribbean pirates, ancient Mayan ruins and a voodoo queen drunk on black magic…

This is the second book of a series and though it gives enticing glimpses of the first book can stand alone for the most part. The only thing that may give pause is the intricacies of the Logan clan which I think you learn the bulk of in the first book. I love Zoraida’s inner monologue and sense of humor. When it comes to the love triangle between Shea and Al I cannot really see the point of it, it might mean more if one reads the first book, as is I was more invested in Shea and did not think much of Al. The descriptions for things add a nice touch to the story and make events more interesting. The overall story was unique, I was totally not expecting that ending, and fair warning the story ends on a sort of cliffhanger.