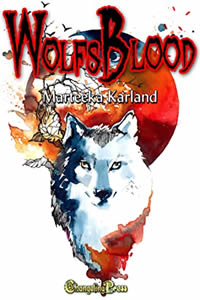 Xander is a Lionsblood and a vampire who needs no woman to make him complete. There is one he is determined to get out of his system, Luna the snow wolf. When he takes her, he believes it will be the end.

Luna knows the Lionsblood/vampire hybrid watches her, but she never lets him know, because he is her mate. When he finally confronts her, she is aware he will fight fate and leave her. She is used to being alone and if all she has is one night, she will still be happy, because no man will dictate her life.

Determined to walk away, he is unable to go far and his instinctual need for Luna draws him back. When he finds Luna she is in a fight for her life alongside another male. He is determined to keep his mate safe at all costs, but will the cost become too high?

Logan is a Lionsblood on the trail of his mate. He does not care about the belief that a Wolfsblood is unable to mate with a Lionsblood because he will have his mate.

Soli fears the Lionsblood hot on her trail, but she is running out of time and is tired of running. When the Lionsblood saves her, she owes him a debt and all he asks for is access to her body for one night.

Logan wants more than one night but figures he could take baby steps to get her to stay. When she tries to leave and runs into trouble, he saves her once again and informs her she can run, but he would always be on her trail and keep her safe from harm. Should Soli go or stay? Maybe one day at a time.

Leiah fights for the pack she saved from the slums, and they are her family. When another Shadow Wolf comes to save her and those in her pack, she is surprised to find she is drawn to him even if she does not trust him.

Rikker has no need for a weak pack and all he wants is his mate. He never expected to find a Shadow Wolf and his mate saving the lives of wolves unwilling to even help themselves, but he is determined to take his mate away.

Leiah will never leave her pack and Rikker never wants to stay. How can two souls headed in different directions ever find a middle ground to survive in?

Felice is Wolfblood and Vampire and thinks she can be with Lyndal and walk away, but little did she know a Savage Wolf will teach her how wrong she was. When he leaves and she feels the danger he faces she cannot stay away.

Lyndal and Felice need each other. While Lyndal is willing to admit it, Felice fights her feelings and almost loses her man. Will these two alphas find harmony with each other or live a half-Iife alone?

Vampsbloods Valel, Relaren, and Harael saved a human in what they perceive as a few years ago. When they try to take a woman back to their lair, they soon learn the one they saved is determined they will be hers.

Josette is a grown woman and she will kill any woman who gets in the way of her being with her men. When she attacks Harael and the woman he dared bring into their home, she discovers her men have no concept of time and believe her to still be a child.

I absolutely love this volume of Lionsblood which includes a variety of species in every story. They are each written expertly and the reader is never left feeling they had missed something. The stories are total, complete, and satisfying to the very end. I loved the uniqueness of each storyline and vivid pictures Ms. Karland paints with just her words. I highly recommend Wolfsblood, book 2 in the Lionsblood series.