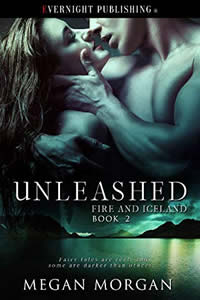 Hera is a strong loyal woman. She is in hiding because she tried to save her husband from the huldufolk. She also has the memory of a dead woman in her head.

Gunnar was cursed by the huldufolk for a century. He looks forward to finally reuniting with his wife.

Hera has been in hiding for two years, waiting out the curse on her husband by the huldufolk. She is furious and wants revenge, asking help from the landissir. Revenge may not be worth the price.

I had a really hard time getting into this book. The author must have introduced the characters and set up the plot in the previous book as I was lost for a long time. Hera is a strong, if angry character. I would be a little unhinged too if my husband was cursed and another woman was living in my head. I had a hard time warming up to Gunnar. He seems to have been less than faithful to Hera; she even has the memory of the woman in her head kissing him. The mythological creatures are interesting, but I had to google them to understand what they were. Overall, the author builds an interesting world, but the reader would greatly benefit by reading the first story.