The Trouble with Tigers by Kimberly Keyes 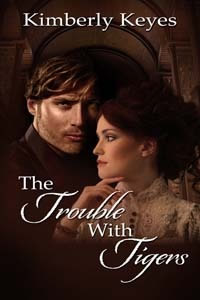 Lady Christine Hastings, or Kitty, shows up at the home of the Earl of Clayborne hoping for sanctuary. The Earl and her grandfather had fought in the war together and had stayed close for the rest of their lives. Kitty recently lost her grandfather as well as her parents and brother before him and was now under the guardianship of her cousin Garrick James. Garrick thinks he will force her to marry him and thinks his marital rights can come before the wedding, willingly or not, so she flees with only the clothes on her back to the only person she can think of that might help her, the Earl. He agrees and disguises her as his personal servant, Kit, a young man.

Lord Ezekiel Thurgood arrives to see his grandfather, the Earl of Clayborne after returning from a trip to Africa visiting the diamond mine he had invested in. He is told his grandfather is playing a board game in the den with his young hired companion, but when he walks in his grandfather is alone. Once he meets Kit he feels like something is not quite right, he is not sure what it is, but something is off. Another arrival at his grandfather’s home in the form of Garrick, brings out the truth. Kit is Kitty, Lady Christine Hastings. The next thing Zeke knows he is engaged to her. After Garrick leaves and the Earl explains the situation Zeke agrees to continue the story of their engagement until she comes of age and will be out from Garrick’s control.

Kitty and Zeke, first as Kit and Zeke start off aggravating and annoying each other. Once he knows she is a she, he realizes he is undeniably attracted to her. She is also drawn to him but wishes she was not since their fake engagement is all there can be. After her childhood of being left behind while her parents took trips to make maps she wants nothing to do with a husband that has no intentions of staying home with his family. Zeke delayed plans to go to America to help her out but never intends to stop traveling. When he does marry he will leave the wife at home with the kids and she can also look after his grandfather as well. When her brother who had been presumed dead shows up he whisks her off and away, he needs her to marry Garrick so he can reclaim his title.

I really enjoyed this book, as the chemistry between Zeke and Kitty is evident even before he knows she is a woman. All the supporting characters were interesting as well, from the Earl to Zeke’s brother, Caden and their friend Randall. The plot Garrick concocts to get what he wants is rather twisted but not as predictable as some in historical romance novels.