The Summer of Guinevere by John V. Madormo 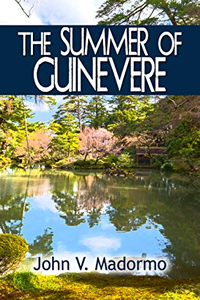 Paulie Passero is an average 16-year-old boy growing up in Chicago in 1968. He is an average student, not really caring about school or things happening in the world. He has never been on a date or even talked to a girl, but hopes to change that in the upcoming school year. A couple of weeks before school starts of his junior year he has to go back to the hometown in rural Pennsylvania his dad came from, but has not been back to in 20 years. Paulie has never met his paternal grandparents or uncle and aunt, but his grandmother is dying so his father wants to return to see if they can reconcile before she dies.

Guinevere “Guennie” Thompson is the same age as Paulie and he falls in love at his first sight of her riding in the back of a pickup truck with her three brothers in the small town of Leroy, Pennsylvania.  He finds out both her father and brothers are troublemakers and he is warned to stay away from her by his uncle and the postmaster in town who see the interest in his face. She has natural beauty and seems to be very outdoorsy which is his type, and irresistible. He sneaks out to the farm to try to see her and amazes himself by actually talking to her. He ends up with poison ivy and having to hide in the barn until well after dark when the others return.

Guennie tries to warn Paulie off but he is persistent in trying to see her and talk to her, and she eventually shares her deepest darkest secret thinking he will run away screaming but he does not. He gets plenty of examples of her family and their violent way of dealing with things, but he cannot stay away. He is also getting to know his grandfather, his Aunt Gloria and Uncle Buddy. His grandmother seems to almost be in a coma but she opens her eyes when he is alone with her but his father does not believe him. His Uncle Buddy is an English teacher at the local school and tries to encourage Paulie to work harder in school when he goes back.

This book took me to a time of what I can only call innocence. I was born a few years after the story is set so by the time I was his age boys were very different, not to mention how my own son was at this age. Paulie had a lot of insecurities before going to Leroy, but in his short time there grows as a person and makes some lasting life decisions after meeting and helping Guennie. I think this book overall told a good story about a boy on his way to becoming a man.