Book 1: The Queen of Blood
Book 2: The Reluctant Queen
Book 3: Queen of Sorrow 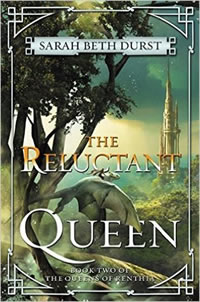 Naelin is a wife and mother, happy in the latter, resigned to the former. She has the ability to control spirits but tries to keep it a secret.

Ven is the Queen’s Champion, devoted to the Kingdom of Renthia and determined to find and train its next queen.

Renthia’s Queen is dying. She has been poisoned and it is imperative that a new queen be found. By chance, Ven finds a man who boasts that his wife has the ability to control spirits and Naelin reluctantly becomes the new heir to the queen. Hopefully she will complete her training before the queen’s demise.

I am not a huge fan of this type of fantasy, but I found this novel to be very well written with interesting characters and an exciting plot. I was lost for a good part of the beginning of the novel, but am sure that if I had read the first book that this would not be the case. I found it refreshing that the heroine in this story is not some sweet young thing, but a woman with experience of life.  She is very powerful but hides her abilities and wants no part of being queen, but once she commits herself to the task, she gives it her all.  The author has excellent world building skills and the plot was inventive and exciting.