The Hockey Player and the Angel, by Franca Pelaccia 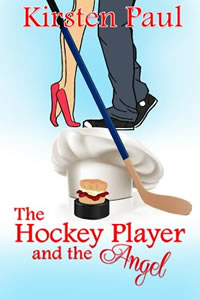 Katrina Sherrer is a Cordon Bleu Chef and should be heading the kitchen of a Michelin starred restaurant. She is stuck trying to save her parents’ hotel and restaurant from bankruptcy.

Marc Johannsen is a very successful professional hockey player and is featured on a popular calendar. He is trying to figure out what to do after his career is over, and sees himself has a property developer. The Acadia Inn property will be his first project.

In a last ditch effort to save her family’s 150 year old inn, Katrina invites the principals of the corporation interested in buying the property to come to the inn and see her vision of its future. Things get off to a rocky start when, during a heavy snowstorm, Marc Johannsen nearly runs Katrina down and crashes his Land Rover into a wall.  A power failure and heavy snow strand Marc and his three teammates with Katrina and her three sisters.

I liked the setting of a remote snowbound inn and the romance between Katrina and Marc is well written; full of miscommunications and obstacles to overcome, but I would not classify this as a romantic comedy, more a contemporary romance. I liked the main couple and Marc’s three teammates, but I found the three sisters to be annoying. They acted like spoiled tramps and treated their already worried and guilt stricken sister like a servant. They made a turnaround towards the end of the story but I found it to be too little too late. Aside from that, the author has written an entertaining winter romance.