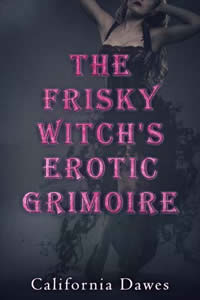 Diedre was a fledgling witch who grew up in the forest away from a village or castle. When she receives a red cape for her birthday it seems to bring good luck as she meets two handsome men and receives an invitation to a ball along the way.

Lucian is having a decidedly difficult day which began when his horse bucked him off and ran away with his belongings. Then he runs into the lover he loved despite his secret. The only bright light is the beautiful lass he meets along the way.

Lucian and Griffin once loved each other but a secret tore them apart. When they meet again, Diedre is standing between them. Was she the part that was missing before, or is she the piece that will bring then together like a puzzle?

Ridden By The Dragon Captain

Maiden Mara is the daughter of the mayor, but she is no innocent. She discovers the man for her is a member of the Queens Dragon Calvary.

Lorne is unable to resist the mayor’s daughter because she is quite an adventuress. When he decides to take her for the ride of her life, he never expected she would so thoroughly enjoy it.

Lorne is a man who never gets enough of his woman. Mara is willing to risk it all to be with the man who holds her. Will Mara enjoy Lorne’s latest adventure?

Claimed By The King: The Unicorn’s Wish

The unicorn shifts once a year from sunup to sundown at Midsummer. The unicorn grants one single wish to the first mortal who finds it first and claims it. No one knows that she is a shifter and she avoids everyone except other magical creatures every other day of the year.

Midsummer brings the unicorn a king. His awe is expected as the unicorn looks different than legend says. King Thancred is different from the start as usually they seek to win wars, but this one only wishes true love.

The unicorn listens to the man’s wish and wonders if for the first time she can be the wish the man needs instead of always giving to others. Can the unicorn’s oops, the king’s, wish come true?

A river spirit is tired of the life she leads and wishes to discover the pleasures of the flesh, or so she tells him. She picks a sailor and makes her request,

The sailor has been on the ship for a year and misses the pleasures of the flesh. When he sees the river spirit, who is known to lead men to their death, he cannot deny her seemingly simple request.

The river spirit wishes to feel a man. The sailor needs to feel the loving of a woman and his desire makes him throw caution to the wind. Will he survive, or fall under the fatal allure?

Coming Into Her Own

Carmody thought she was doing as well as a girl like her can expect, even if her boyfriend bails on her by sending her a text meant for someone else. She thinks she is just plan ole Carmody, but her roommate tells her she is so much more.

The invitation to the Midnight Ascension Party by the Amethyst Society comes at an opportune time. Carmody and her roommate need to go out for the evening, and the party sounds perfect.

Before the party is over Carmody has been inducted into a secret society and found more than she ever thought possible.

Meeting The Boys After Work
Danika is a powerful coven leader who is looking for a good time, and the best place to go is the Power Keg and the pack.

Bride and his pack are more than willing to meet the needs of a powerful woman who just needs a moment in time when she is not in control.

What is better than hot yoga?  Three hot werewolves to take the edge off. Danika knows the Powder Keg will fulfill all her needs.

In His Pocket: The Arcanist’s Ward

Verity Gibbs is turning eighteen and is about to receive a special gift from her guardian. She has always found the man attractive, but he had little time for her.

Christopher became her guardian through the death of his good friend whose last request was that he see to her education. What can a man do but to fulfill those last requests?

Christopher was shocked by his attraction to the young Verity and sent her to boarding school for her safety, and his, but now she is back and all grown up. When he uses a mystical gift to get her attention, he hopes it will bring her closer even when he is so far away.

All of the stories are well crafted and provide a glimpse of true love despite the odds. My favorite was The Unicorn’s Wish; it is a truly moving magical story no romantic should miss. The stories all provide a little gem for any reader and the brevity enables the reader to fit them right into any schedule. The stories make and impact on the reader for the few moments the reader is enticed into the lives of these lovers.