The Duke is Wicked by Tracy Sumner 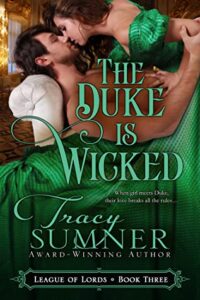 Sebastian Tremont, Duke of Ashcroft, never expected to be the Duke. He was the third son and was born with the ability to start fires with his mind. He ran away and joined the military, but eventually returned home to take up his title. In the meantime, he found some friends with similar abilities and they founded a league to work together and protect each other. One of the other members has been having dreams involving Sebastian and a woman who is involved in trying to find out secrets about him and the group.

Delaney Temple is an American, not remotely aristocratic, and entirely too smart for her own good. She and her twin brother, Castion, are known as “The Terrible Two”. She has been sneaking around and researching not only the Duke, but also his friends because she is being blackmailed over something that happened when she was still in America. She has what might today be called a photographic memory but with more capacity. It seems to others that she goes off into her own mind and comes back with answers she seems to be reading directly from a book. She calls this going into her “attic”.

When Sebastian confronts Delaney in the park he is stung by a bee and has an allergic reaction, and she gives him mouth to mouth to keep him alive. His friends arrive and kind of take over. She and her brother are heavily encouraged to travel to one of the Duke’s country homes with the rest of them so they can let him recover and uncover whatever is going on with her and her blackmailer. Sebastian and Delaney annoy and attract each other in equal amounts. He has decided he cannot marry a woman he cares about since he is not able to control his fires when his emotions get away from him, so has decided to marry someone he finds annoying, but as he and Delaney spend more time together trying to solve their mutual problems, they give in to their passion.

I did not know this was the third in a series when I got it to read. It was an enjoyable, well told story which left me needing to go back and read books one and two and then get book four when it comes out. Sebastian may be your typical tortured gorgeous male main character but he is different enough to keep your interest.  Delaney could also fall into the innocent female lead, not afraid to take what she wants, but she still has quirks enough to make her someone I would like to know. They shared some serious steaminess in their romance and the League make for a well round out cast with their own stories you will want to read.