The Courtesan Countess by JoMarie DeGioia 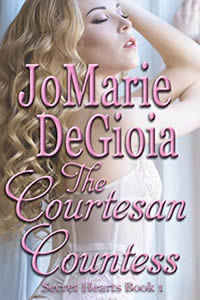 Miss Marianne Ellsworth meets Lord Marcus, the Earl of Lacey, after his friend Robert Pierce, the Viscount Devlin, purchased her services for the night on behalf of Marcus. She is trying to support her younger sister, Brianna, and her Aunt Hattie through a season while Brianna hopes to find a husband who can support the three of them in the future. Her innocence was lost to her Aunt’s stepson who said he would pay their expenses in exchange for her favors. He was already married so she knew what he meant, but he was rough and uncaring. She felt like since she was no longer innocent she would not be able to marry, so their best shot would be for Brianna to marry well. The family was left without any type of income after Aunt Hattie’s husband died and his son inherited everything.

Marcus Lacey is known as “strait laced” Lacey because he comes across as cold and uncaring. He was the second son who never thought he would inherit, but after both his father and his brother died the title came to him. It took him a couple of years to put all the properties in order so he is making money instead of losing it, and because both his dad and brother cared more for drinking, gambling and womanizing, he tries very hard to not be like them. His one problem is in the will it says he has to marry by his thirtieth birthday. He will turn thirty on the last day of the year, and his fiancé just eloped with his “man of affairs” so now he must start all over with courting and proposing and he only has three months.

After the first time with Marianne, who calls herself Annie when she has sleep with a man for money; Marcus proposes that he will purchase her services exclusively through the end of the season. She agrees for a couple of reasons; first, this will keep her from having to deal with new strange men; second, she hopes by the end of the season she will not have to do this anymore if Brianna marries well, and third, and most surprising to her, he makes her feel passion and desire when no one else has. She still must go out to parties and on calls in normal society, but she tries to appear as different to Annie as she can. As Annie she leaves her hair down and loose, but as Marianne she wears it up and very restrained. She encounters Marcus and Rob, but keeps her face down or turned away and she frowns and barely talks, and it takes them weeks to even suspect Annie and Marianne are the same person.

This book was a wonderful read. I fell into it and did not look up until it was over. I think sometimes I see the genre historical romance and feel like they can be predictable. In some ways, this book was predictable, but it was such a well told story that I did not care. I think I would call this the Pretty Woman of Historical Romance. I thought the relationship and chemistry between Marcus and Marianne was honest and very steamy. I enjoyed the other characters who I think the author has plans to bring them back in the future. I am really looking forward to reading more from this author.