The Beta’s Spitfire by Gale Stanley 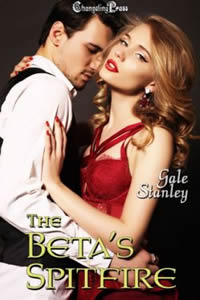 Delilah is an alpha she-wolf intended to marry an alpha in New York. Unfortunately, her intended has no interest in the alliance arranged by their family. She spends more time with the pack beta and finds him to be more interesting than her intended. She has no intention of going back to her pack because her father has no respect for women or his daughter.

Samson is the beta of his pack and it seems he is forever cleaning up after his alpha. He is forced to continually to provide Delilah excuses for his alphas absence and she makes him nervous, so he is forever stuttering around her. When a furious Delilah leaves, he feels responsible for her safety, though no one else seems to have a care for where she went.

Delilah is furious and in a fit of rage she leaves, but she soon learns that New York is not a safe place. She is saved by the woman she once felt was beneath her and the beta she is coming to have feelings for. Delilah is shocked to find the first man she wants to be with is a beta, but is there a way they can be together?

The Beta’s Spitfire is a wonderful coming of age story paranormal style. I like how Delilah’s character grows and becomes stronger with every page. Samson is a strong man, though initially he appears weak. The story is about an evolution of love and personal growth and what happens when the life the characters thought they would have is turned upside down.