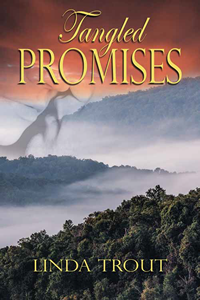 Jake Bennett recently moved from Chicago to the small town of Rock Ledge, Arkansas. He had been an officer with the Chicago Police Department but was forced to quit after a witness he had been protecting was killed. Now he was the sheriff of this small town.  As a bachelor, he did not cook much so he was in the practice of going by The Tangled Rose Café for breakfast every day. The owner, Melody Rose, kept her distance and seemed like he made her uncomfortable. One day while eating he gets a call from his deputy that there has been a plane crash in the area. Melody overhears and tells him she is coming with him, as the property where the crash is belongs to her best friend.

Melody Rose is a young widow of the local war hero and owner of The Tangled Rose Café. She works every day at the café where the townspeople have put a shrine to her dead husband, Michael. He had served in the Army, and been deployed. After he left service, he volunteered helping other veterans.  It was one of these people who killed him and then committed suicide right in front of Melody – which is why she is very uneasy around guns.

Jake and Melody have a roller coaster ride of getting to know each other after he saves her life, then her tires are slashed and the café vandalized. He is not looking for a relationship because he plans to return to Chicago at some point and she does not want to be involved because she has not quite got over her husband. Regardless, the both start falling in love. Jake gets a chance to clear his name in Chicago and maybe get his job back and he feels like he has to take the opportunity. He tells Melody he is leaving and she shuts down. She let herself believe and open up to the possibilities, and now he is ready to throw it away. He is literally on his way to the airport when he finds out one of his open cases from Chicago may have followed him to Rock Ledge with a twist I did not see coming.

This was a well told story with a lot going on and a twist that will surprise you. It felt a little slow at times even though there seems to be problem after problem happening. Jake and Melody are both likable characters with believability.  I live in a small town in Arkansas (not Rock Ledge-if it exists) and can say from experience, this author has life in a small town down perfectly.  Everyone knows everyone and their business.