Raking the Ashes by Kait Gamble 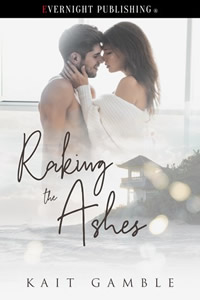 As a successful romance author, Tamara has made a life for herself, achieving fame and fortune after surviving a terrible trauma ten years earlier. She had wed too early; pregnant by her college boyfriend who married her and took her home to his family. He then proceeded to pursue family business interests, leaving Tamara in the care of his parents and their household staff, little knowing the cruel and brutal treatment she received. Suffering from near fatal gestational nausea, she lost the baby and fled, sure he had no care or concern for her. She felt he also believed as his family did after they chastised her constantly for not being good enough for their son.

Now successful in his own right, Peter has spent ten years trying to locate his wife. His father had told him she chose to have an abortion and fled. He is bitter, hurt and angry but still driven to find her. At last he locates her and arrives at her door, determined to comply with his dying father’s wish to see and talk to her. He also has dreams and plans of recreating their marriage since they have never divorced.

Tamara is hesitant to go anywhere with her former husband, and even more fearful of meeting his father who has never shown her anything but contempt and cold disdain. She recognizes at once that her body still remembers the powerful attraction and chemistry they shared, but the idea of giving in to those insistent urges terrifies her. Peter is shocked when his father apologizes and admits how badly he had treated Tamara and then lied about what had occurred. Peter is furious and determined to make up to Tamara for the appalling wrongs done to her—but can he make her listen? Will she ever dare to trust him?

While romance author heroines are almost a cliché, the shared history of this couple pulls the novel out of that shade. No manufactured conflict here, the two are badly scarred by the acts of others. The emotional wounds they both bear are so vividly real the reader has to feel and believe their pain. I rooted for them to find healing, peace and in time their happy ending though it seemed a long shot until almost the end. It is a strong and absorbing read.