Nuttin’ But Trouble by C.B. Archer 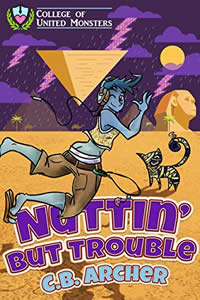 Porter is a gay ghost, a classic trouble maker at the College of United Monsters where he is quite a slap-dash student and also an on-call sneak, spy and sometimes thief for various officials and staff. He gets into trouble often but can usually squeak by with charm, slyness and sheer luck. However that does not help much in his desire to keep a pet cat. The Headmistress always seems to find and confiscate them. He’s had more brief pets than their proverbial lives so far. Of course they are all ghostly or some kind of magical or monstrous creation.

In this, the fourth installment of an ongoing series, he takes on a task which ultimately has far ranging and dire consequences, causing much harm he did not intend. Porter is really a kindly and goodhearted being so when he learns of the resulting deaths and tragedy, he is very distressed. Still, but all is well that ends well. Any explanation would be a spoiler.

I am at a loss what to call this tale! The writer breaks almost every rule in the book with no genre specific paradigm and all but saying, “And now, gentle reader” in classic Victorian fashion on occasion. However it is far from Victorian, hilarious, absorbing, and exceedingly cleverly done from the first line to the last. A reader who expects a regular m/m paranormal romance will be nonplussed but for something unique and out of any and all boxes, it is really quite enjoyable!

College of United Monsters Series
Desires of the Deep, #1
Centaur of Attention, #2
Gorgon in 69 Seconds, #3