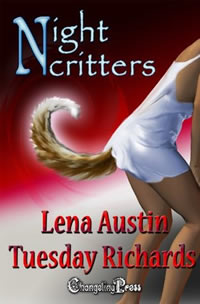 Night Critters is an anthology of mixed-species paranormal romances set at various points in the mid-21st Century, after a plague has decimated the human population and the homo sapiens survivors have had to face the reality that they are not the “top dogs” (all dog-related puns intended) on the food chain. The anthology brings together a total of five stories from this same universe, some of which were previously released as solo e-novellas, all involving at least one canine shifter in each romance pairing/grouping.

The first couple, Roni and Corbin—a Husky/Chihuahua canine shifter and a wolf shifter respectively—manage to hit the jackpot with each other through the miracle of online dating. Unfortunately, both of their profiles are complete lies—Roni’s because her profile was set up by her interfering vampire roommate Ana, and Corbin’s because he is pretending to be a human (so that he does not get hounded by the kinds of fake bitches he is normally surrounded by in his father’s pack—who only want him for his wealth and pack status rather than his impeccable breeding lines or his hot bod). Clearly, the authors have been bitten (or know someone who has been) by the digital romance scene. Austin and Richards do sling a lot of funny quips (Roni tells a failed vamp suitor to, “Hit a tanning salon. You might have more luck with the ladies if you didn’t glow in the dark.”)—but their comedic timing is not always on the ball.

Thematically, there is also a preoccupation of some of the characters within the universe with species purity which ties the stories together. And, while this issue is certainly a real-world, current-events concern that could be exploited for genuine pathos, it is used as a plot point of manufactured drama, as an easily overcome obstacle to the romances, in a collection which is marketed as fun and sexy. In trying to mark both territories, but really only solidly claiming the “funny” ground, the reader’s attention is easily distracted.

The biggest issue, for me, was that their characters tended to speak certain lines as verbal monologue, rather than having those lines given as inner monologue or narrative commentary; one such example, while Roni, gets comfortable at home after her disastrous introductory date saying (after we are told that her tail is poking out), “Nice. My Tail is showing. I really am horny.” This tendency toward spoken monologue really broke up the flow of the story, and unfortunately was also part of a larger trend by the authors toward telling rather than showing, especially where establishing the characters was concerned. Personally speaking, this collection was not my brand of kibble.