Lethal in a Kilt by Anna Durand 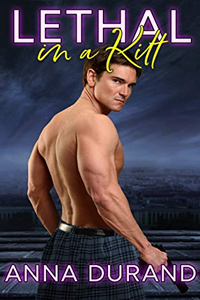 Logan MacTaggert is a former Secret Intelligence Serviceman (or a spy) and served time in the military before retiring and then taking a job as a brick layer. Now his cousin Evan wants him to come work for his as Chief of Security at his company, Evanescent Security. Logan does not think he actually qualifies for the position, but is prepared to humor Evan. The only road block he foresees besides boredom is Evan’s personal assistant Serena Carpenter. They have a mutually hostile relationship even though he really wants to “poke” her.

Serena Carpenter is Evan’s assistant and his wife’s best friend. She is a widow and the mother of a teenage son Chase. Her husband was killed in the line of duty while serving in the military in Iraq. She detests Logan because he comes across as chauvinistic and demeaning, like women are only meant for one thing and they all want him. Unfortunately, she finds him very attractive.

They spend most of the first half of the book arguing or getting busy and then arguing some more. Not only are Evan and his wife Keely trying to fix them up together, but then Logan’s sisters arrive from Scotland to join in the efforts to get them together. Even Chase, Serena’s son, is not averse to them getting together. Evan cooks up a plan to send them away on a business trip together as a last ditch attempt to make them spend time away alone together.

I enjoyed this book quite a bit. At first Logan struck me exactly as Serena described him, but little things started to peek out to show there was more to him than the hunky package he came in. I admit, I have a massive weakness for a man in a kilt. They make progress and have setbacks like any other couple and have to figure out how to work through them. After going with Logan on an “adventure”, another old friend hired him for utilizing his old spy skills, and she has to come to terms with her own issues from the past for them to be able to move forward. I have not read the rest of the series but plan to seek them out due to said previous weakness for men in kilts!