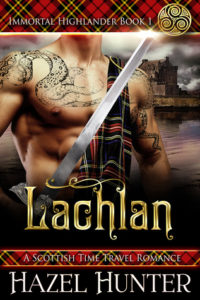 Kinley Chandler is former military, having no family, her career over, and wounds too much to bear only wants to die. During an outing she seizes the chance to jump, but instead of oblivion she lands smack in the middle of a medieval battle between Scots and … Romans? Her quick reflexes have her defending the Laird from an attack from behind—with fireballs shot from her hands. Thinking herself stuck in that time she has to find her place there, make due with new powers, and her attraction to the Laird and the prospect of falling in love for the first time.

Lachlan McDonnel, the laird of a clan of immortal highlanders, cannot believe his eyes when rescued by a lass shooting fire from her hands. In spite of the law banning mortals from the castle he brings the lass anyway—owing her life debt for saving his. For 1,200 years his clan has lived steeped in secrecy, forsaking normal lives, and protecting the druids. He begins to wonder if it is too much now that his heart has started to love after thinking it not possible. Despite everything against them, including her mental demons, he is adamant to keep her.

Lachlan and his clan were brought back to life by the druids in thanks for them buying them time to escape the invading Romans. In turn the Roman legion was given their deaths, turning them into the undead, unable to stand sunlight, and needing to drink blood to survive. Some do not want Kinley at the castle and will do anything to get rid of her, even betray the clan. In search of answers the druids come to speak to the Laird, Kinley over hearing thinks he wants her gone, leaves in search of her own answers as to why the grove brought her. Will the legion get their way and end the clan; will their spy lure the clan into the legion’s trap? Or will love spoil it all?

Everything about this story was nicely done from the writing that flowed smoothly, interesting characters and lore, to the adventure and fast paced action. I loved both Kinley and Lachlan they fit so well together and I adored their mutual respect for each other along with the romance. There were multiple PoVs, but they were well done and added richness to the story. Ms. Hunter hit upon the right formula for a time travel romance it has the right amount of everything to make for an entertaining read. It has a strong heroine, a desirable hero, an interesting backstory/lore, and the right amount of historical facts added to add authenticity.