I Have to Have Her by Sam Crescent 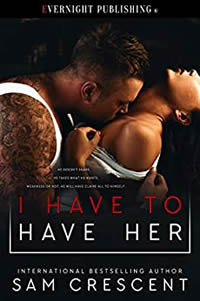 Gabriel lives life on his terms only, and expects everyone else to toe the line. When his younger sister asks if her friend can stay in his home temporarily, he reluctantly says yes. When he finds Claire dancing in his kitchen wearing only panties, she changes his world, and he is determined to get her out of his system.

Homeless because her ex punched her and stole all her money, in addition to not paying the rent with the money she gave him every month, Claire no longer trusts men and has no clue why everyone thinks sex is great when all she feels is bored. Gabriel has never liked her, so even though he said she could stay and even gave her a job, she is working to get out because he lives in a world she does not understand.

As Gabriel gets to know Claire, he realizes she is not the woman he thought her to be, or even one he had ever known. When they make a deal for 31 days, he believes she will be out of his system and he will move on, but what happens is she is so deeply embedded in his soul he is unsure if he can make it without her.  When the scum who wants to get to him goes after his sister and Claire, he realizes he must let her go because it is the only way to keep her safe. Seeing her in the arms of another man, he is left to wonder if he can really live without her.

Gabriel is an intense man who is used to controlling his world. Claire is a woman who takes care of herself. These two make for a sexy story of self-discovery and find out the future may not bow down to what people want, but instead what they need. I was fascinated by the story and found Gabriel to be very entertaining as he loses all control when he has always fancied himself to be a man in control. I recommend Gabriel and Claire because with these two the reader is always wondering what is next.