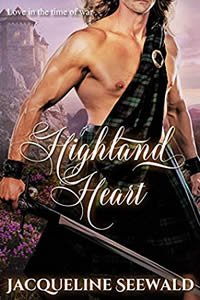 Madeleine de Marnay first sees Gareth Eriksen at a ball she attended with some friends. She was warned off from him, as he was a known ladies man, notoriously single with plans to stay that way. He was at the ball with his current lover who is married to someone else. Even with all of this information, she can not seem to resist following him out to the patio hoping he would notice her. She is only seventeen and this was her first trip to London after her father died at home in France. Her mother had plans for them to leave for Scotland soon to visit her side of the family and meet the cousin her mother wants her to marry.

Gareth Ericksen is the son of a duke, but born on the wrong side of the blanket so he went into the military. Having been raised under the shame of his illegitimacy, he never plans to marry or have children, but his first sight of Madeleine makes him wish she was older or he was not as honorable as he thinks he is. Their first conversation both bewitches him and makes it blazingly obvious how naïve and innocent she is, but he finds her bracelet on the ground after she leaves and vows to take it to her the next day discreetly. He figures that since he is off to Scotland to hunt for Bonnie Prince Charlie and to subdue his followers, seeing her one more time will not hurt anything.

Both Gareth and Madeleine run into each other again in Scotland. He is in charge of the search for Prince Charles, and she helped the prince escape. Her mother, who has been in declining health for a while, passes away while she was gone helping the prince and Gareth shows up after the burial and finds her alone at the graveside. He consoles her and then accompanies her to the castle to inform her cousins of his charge. They both know they should not be together, but somehow neither one can seem to resist the other. They have to go through a lot to overcome all of their issues.

I enjoyed this book. Madeleine is both young and inexperienced as well as intelligent and determined. She knows what her mother wanted for her, what her half-brother wants for her, but fights for what she wants. Gareth has been hurt by women in his past, both his mother who committed suicide and someone who he thought loved him but would not marry him because of his illegitimacy. He has major trust issues that he has to overcome before he can see Madeleine for who and what she really is.