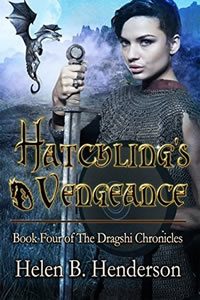 Glynnes is a dragshi, or one who has twin dragon soul. This allows Glynnes to shapeshift into a dragon. Her dragon twin’s name is Janaleigh. She is bodyguard to Lexii, another dragshi.

Glynnes knows that in order for Lexxi to conceive a child there must be multiple suitors vying for her while in flight in their dragon forms, but that does not mean that Glynnes has to like it. In fact, she hates it, and prays that Talann is not the one to catch Lexii. Though she and Talann love each other, there was a time when Talann was attracted to Lexii, and the old attraction sometimes rears its ugly head. When Talann is injured by Kynan during the mating flight because he got too close to Lexii, he falls from the sky, and Glynnes breaks the rules in order to save him. Fortunately, a fisherman is close by and assists Glynnes with helping her mate. But the fisherman in question holds a dark secret, he is the nephew of a fanatical leader called the Parant, an evil man who the dragshi have been working to stop. When he discovers the dragshi will also be traveling with Clan Weiss, along with he and his wife, he becomes very worried that they may recognize him and his wife as followers of the Parant. And well he should be worried, as should the dragshi, for the Parant while well hidden, is working towards gathering more followers. If he has his way, he will destroy the dragshi, who he feels are unnatural. Will Glynnes and Talann be able to complete their own mating and look forward to a child in the future? Will they along with the other dragshi and their allies stop the Parant?

Hatchling’s Vengeance is a wonderful fantasy romance with strong world building and lots of action. I loved the fact that Glynnes is such a strong female character. Her ability to carry a sword and fight at the side of her mate made her very appealing to this reader. I also loved the idea of dragon twin souls. Since I am a huge fan of dragon shifters, the idea of this just tickled me. The complexity of the story, the romance, the number of secondary characters and the strength of the world building make this novel a true keeper. I for one am off to get the other books so I can learn the beginning of the story, since this is the fourth book in the series. If you love fantasy romance, you do not want to miss Hatching’s Vengeance!