Happily Whatever After by Stewart Lewis 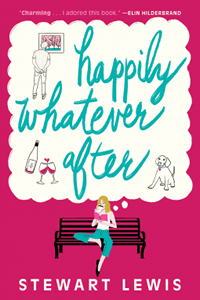 Page is in her mid-thirties and has a head start on a mid-life crisis. She lost her job at the art gallery she worked at in NYC and her boyfriend dumped her. So she moved to DC and is living with her brother Brady while she figures things out. She starts spending a lot of time at the local dog park, even though she does not have a dog, just people watching and dog watching.

Mark is a guy she first comes across at the dog park. She decides he looks like perfect future husband material. No ring, two happy dogs, dresses well enough to earn the nickname “BR” as in Banana Republic, where she thinks he must shop. Their first few meetings happen at the dog park and they never exchange more than small talk and the dogs’ names.

Page seems to attract a ragtag collection of people who she runs across at the dog park. There is Barkley and Preston, a gay couple with a Scottie named Sumner;  Kevin with a retriever named Sammy. Kevin hires Page to walk Sammy when he is too busy to do it. Then there is Nadine with a teacup poodle named Beanu who also teaches yoga. Page has no direction and feels like she has no real purpose. Her brother Brady is her best friend and hero. He has a successful restaurant and a serious girlfriend. Their mother has been having an affair with a married man since their father died and they are not that close to her. Page stumbles along, makes a lot of friends, is there for her brother when he REALLY needs her, and ends up with not just BR but also her own art gallery in DC.

I enjoyed this book for the humor. Sometimes it felt a little disjointed with the way Page kind of hops all over the place and thinks she is ‘supposed’ to be married by now. Even though I felt distracted a few times with the way she is so directionless, the author pulled it together at the end and gave her purpose as well as her own “happily whatever after”.