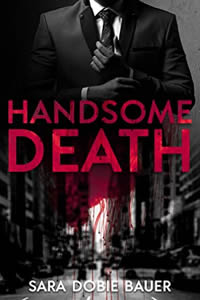 Ethan is a vampire—but not exactly a typical one. He stands 6’5” and is a professional mercenary, or essentially a hired assassin, a trade in which he excels. He is one who observes rather than become involved in the events around him, until he sees a crude bully harass a beautiful young man at his favorite coffee shop. He steps in to defend the younger chap, not sure why. Vampires are certainly not supposed to feel, much less act on, fascination with a human.

Tristan, or Tris, is a student, avidly pursuing his dream of becoming a famous pianist. He has his circle of friends, but entertains a secret fascination with vampiredom. However, he is a bit put off by the huge man who begins to follow and guard him, soon recognizing his new protector is actually a vampire. He is both attracted and repelled. Should he call a halt or begin to flirt?

To go much further into the development of this relationship would create far too many spoilers because there are surprises with every page turned. It is a romance, so you can perhaps guess an upbeat ending is coming, unlikely though it may seem for these two radically different beings. However, the road to reach that goal is absorbingly twisting and complex.