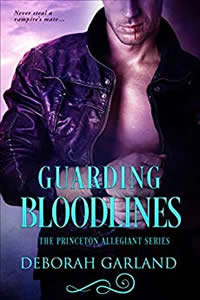 Guarding Bloodlines picks up shortly after the event of the first book in the series (Drawing Bloodlines) and follows the actions of vampire Loren Targaris, who is looking for a missing vampire commander while also trying to save the life and freedom of one of his progeny, which is threatened by the nefarious Vampire Lords. In this series, vampires are organized into quasi-militaristic groups (called Allegiants) based on their geographic location; each city’s Allegiant is headed by a commander and owes its obedience to the New York Vampire Command, who dispense laws and justice. But like any evil cabal of ancient vampire authorities worth their salt, the NYVC have given Loren a choice between a poisoned apple and a nuclear strike: find and rescue a missing allegiant commander AND mate with his not-fully-vampire progeny Julianna, or Julianna will be forced to become the blood- and sex-slave of the four Vampire Lords.

Due to his age and extraordinary gifts, Loren lives nomadically, too dangerous to belong to one Allegiant and isolated from others of his kind. Often called in by the NYVC to frighten vampires into compliance, Loren is feared and envied, ensuring that he never receives a kindly welcome from his fellow creatures. While capable of destroying the Vampire Lords—and he certainly despises them enough to do so without remorse—Loren recognizes that they are a necessary evil in terms of keeping the wider vampire community in line and knows that without someone (preferably not him) willing to step into their shoes as ruler(s), the secret existence of vampires would be exposed by the resulting wars for power.

Both like and unlike her sire, Julianna is an outcast from the vampire community… Except that she is hunted by vampires for being different. Despite his attempt to turn her in order to save her life—she was being burned as a witch by her Puritan neighbors when Loren scooped her up—Julianna became immortal, but not a vampire. Blessed with many of Loren’s metaphysical gifts, but not the insatiable need for blood and sex, her uniqueness makes her the target of the Vampire Lords’ lusts and schemes.

The world-building for this book was very well done, and the character of Loren in particular was very well developed; however, Julianna remained very much an enigma and could have used greater focus and elaboration. While mention is made of her history, there was very little background or exposition for her character; I found myself constantly yearning for more details about her life on the run and the events that shaped her into the person she is. As firmly fixed in the present as the whole book was, I felt that it could have benefited from a few flashback scenes to better establish the personalities and motivations of the characters. The chemistry between the leads, while frequently highlighted, was often interrupted unnecessarily by plot devices.

There are no upcoming events at this time.