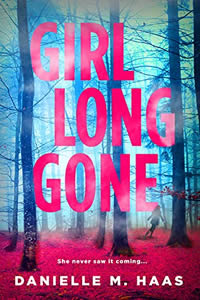 Detective Connor Mitchel is in an impossible situation. His sister, Monica, is missing and even though he was a detective, he could not officially work the case, because it was his sister. Like there was any possibility of being able to focus on anything else. Their parents died years ago and they only had each other. He knew Monica did not deviate from her routines, so he was pretty sure someone had taken her. His gut instinct told him who it was and he was going to find her and prove it. His specialty is Computer Crimes so he hacked into the dating site he thinks her abductor met her on and does some digging.

Evelyn Price is about to meet an old schoolmate in hopes of scoring the job she needs designing a website for his company. She found his contact info through the same website Monica was on before she disappeared, but Evelyn does not know that and has also told the man she is going to meet she is not interested in a relationship, she is only looking for work. Right before she walks in to the coffee house to meet him her phone rings and it is Detective Connor Mitchel. She has no idea how he got her information and how he knows she is about to meet up with this man.

Connor rushes to try to stop Evelyn because he thinks the guy she is meeting is the man who took his sister. He shows up at the coffee house and interrupts them, the guy leaves and Connor explains his situation to Evelyn. She blows him off and leaves, but agrees to take his contact information. She sets up a dinner with the guy and curiosity drives her to look in his coat pocket when he goes to the bathroom where she finds two sets of keys, one of which matches some she found in a picture of Monica. She starts working with Connor, her roommate, Lacey and the private investigator Connor hired, Ben to try to find Monica and prove who took her.

I enjoyed this book, even though the bad guy was out front and in your face from the beginning, instead of trying to figure out who the bad guy is the way you do for most thrillers or suspense novels. Instead, you have to figure out how he is keeping from being caught and his reasons for what he has done as well as what his ultimate goal is. At times, it felt like I was on a very twisty path, but none of the twists were unnecessary. I really liked that Connor fought to focus on his sister instead of his attraction to Evelyn, it made it more realistic for me.