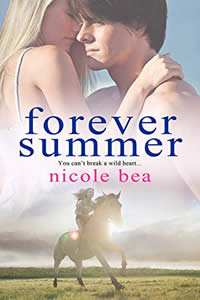 Morrigan “Mo” Westhaver is being sent to Alabama to live with her father on his ranch and it feels like a punishment to leave her life in Michigan. When she was little she wanted to learn to ride a horse like most little girls, but thought she grew out of it. She has not seen her dad since her parents divorced several years earlier. She does not think going to Alabama for the summer is going to fix her. She is not sure she can be fixed, or at least that is what her ex-boyfriend, Fitz has led her to believe. Fitz is another reason her mom wants her to go to Alabama, so she can be away from any of his influence. The last time she saw him is when the police were dragging him away after he hit her and her mother found out and called 911. Then Mo tried to kill herself.

Levy Rider is a ranch hand on Mo’s dad’s ranch Tin Star. He is easy on the eyes and easy to be around. He coaxes her out of her shell and gets her to slowly learn the horses, starting with his own Rosie for her first ride. The ranch takes on horses that everyone else has given up on, and a group arrives a few days after Mo and that is when she meets Stormy, who becomes her horse. Stormy and Mo are both recovering from abuse and heal and grow together with Levy gently coaching. He gets Mo to open up about Fitz and she realizes she is developing feelings for Levy, but old habits are hard to break and she still re-reads texts from Fitz where he mentally abused her, and she even tries to call him but the number is disconnected.

Just as Mo and Levy grow closer and she lets him break down her walls, adversity strikes. Mo’s mother comes to Alabama and she finds out Levy has already met her mother and she knows more about him than Mo does. She feels betrayed again because of the secret he had not told her. She had just started trusting him, but now she is back to thinking she made yet another mistake.

I enjoyed this book because I feel like the author did a wonderful job telling Mo’s story of abuse and recovery. The power of healing while bonding with a horse feels honest. Levy’s patience with her while she tries to retrain her mindset sets the right tone, except for not giving her his truth upfront. She might have been able to open up to him easier if he had started with that.