For the Taking by Sam Crescent 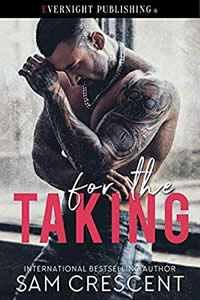 Riley is a man who lives for one thing; revenge. The man he once was died on the floor where his wife was murdered. He has spent a decade going after the man who murdered her and his unborn child. He has been on the same path, until Meghan.

Meghan has never had anyone who cared about her or took care of her. When she declines the attention of a dangerous man, he decides to show her what happens to a woman who says no. As horrible as it sounds she thinks is is the best thing that has ever happened because it brought her Riley.

Who knew the word no could rock the world. Now Riley and Meghan found in each other what they never had with another, but destiny is right around every corner. Life or Death? Everyone has a choice to live or die; will Riley and Meghan have forever or only a moment?

Riley is a man on a mission and the reader will wonder throughout the story what he will ultimately decide. I loved Riley because who can pass up a man who loved a woman so much he spent ten years and was willing to sacrifice his life for his wife no matter what she had done? Meghan is written in a way the reader can feel her pain of never being loved yet still willing to understand the need in Riley. I enjoyed the characters of what I thought was going to be a dark story, but really it became a sweet love story with a bit of spice.