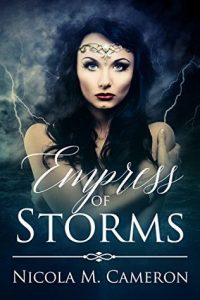 Queen Danae of Hellas is to marry the King of Ypres, who she has been in love with for as long as she can remember. She is also a potentially powerful water mage, but her studies have been stymied because of the rumors surrounding her father’s death. At first miscommunication keeps them from fulfilling the promise of strong love and desire between them. A close call with an evil magic saves the king’s life, strengthens her spot at his side, and increases her credibility with the council.

King Matthias of Ypres mourns his dead queen, missing son, and now to save an important treaty he must marry a girl who was supposed to have married his son. He blamed himself for the death of his first queen, but, thanks to the cleverness of his new queen, it appears that evil magic was involved and things are more complicated than first thought. Now he is free to love Danae, though the plot she has uncovered points to his own son being the culprit and that he, himself, was the intended target.

They travel to her kingdom and the closer they get more signs point to his son being a victim. Once there, they find news of his son and rumors of dissidents scheming to remove her from her throne. Following news of his son Matthias finds that the truth is more sinister than imagined. A messenger arrives on their heels with news of a coup in Ypres. It is days away, so how will they save it in time? How about her throne? The key might be found in Danae’s powerful magic, but can she learn enough in time to save their kingdoms?

The world is an intriguing fantasy world with a unique school of magic, cultures, and good characters that have the right touch of detail/description to them. I found the book well written, both story line and the intimate scenes, nothing seemed drawn out or overly flowery to fill pages. I would have never thought of a plot twist like the one this story had and can honestly say I did not see it coming. This is a great find for those fantasy readers who want a little spice in their reading or those who love a good erotic book with a well-developed fantasy element to it.