Emily’s New Everything by Elizabeth Allison 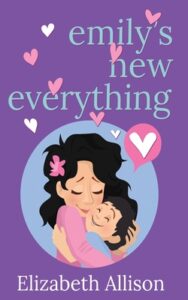 Emily is an Italian American girl from Michigan. She is married, has a three year old son and works as a waitress. She is usually overwhelmed and exhausted, but thinks she is almost happy.

James is Emily’s best friend’s big brother. He was a big goofy nerd in high school, but now he is very successful and has grown into his looks. He has always had a thing for Emily, but she was always unavailable.

Emily is doing the best she can to keep up with her life when her husband and his new girlfriend, also known as her high school nemesis, walk in the door and announce that their marriage is over. Shortly after that, her boss at the restaurant announces that he is retiring, leaving her job in jeopardy. A fight with her mother leaves her without childcare and her father falls and breaks an ankle leading to complications that almost kill him. Amidst all of this, Emily decides to remake herself and start dating again with often hilarious results.

This book starts out a bit slow and depressing. Emily’s life is a series of disasters that she bravely faces. The characters are largely unlikeable, especially her mother, the ex-husband and his girlfriend Amy, and her former best friend since kindergarten Grace Ann. Emily is a doormat in the beginning but has grown a spine by the end of the book. On the good side, the author’s descriptions of Emily’s dates are very entertaining and her friend Michelle, sister, and babysitter Sophia are steadfast friends and always there when she needs them. Overall, I enjoyed Emily’s story and was really happy when things started to get better for her.