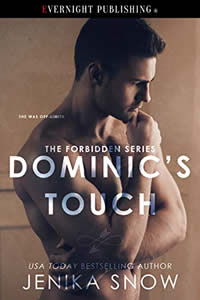 Chloe was young when she stood up at her aunt’s wedding to her uncle Dominic, and she always thought he was special. He was the only one in the family who genuinely cared and did not have a love of money or status. When she graduates, she goes to her aunt and uncle’s house with her family to celebrate when a secret is revealed and her whole world changes.

Dominic is tired of playing games for appearances sake. His wife cheated on him and he is divorced from her, but when she asks him to keep up appearances he agrees to keep from ruining Chloe’s graduation celebration. His life is irrevocably changed by the life altering events which occur and he is left deeply ashamed of his actions and guilty because he still thinks about her.

Chloe and Dominic have always had affection for each other, but when she becomes a young woman and events occur they find themselves looking at each other in a different way. Will shame, guilt, and life get in the way, or will they move past all that and find their forever with each other?

Dominic’s Touch is only taboo in the idea that they have known each other since she was a preteen, but other than that is a story of an older man and a younger woman. I like the characters because Dominic is a man of honor who is unable to deny the feelings Chloe inspires in him, and makes a choice he thinks is right and his guilt almost destroys him. Chloe is a strong woman who was different than her family and is perfect for Dominic. If you like true love and passion in difficult situations, then Dominic’s Touch is just right for you.