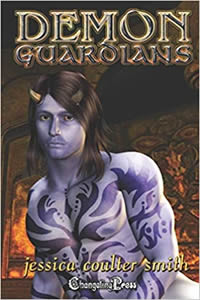 Bale is one of a group of Tinta Demons sent as guardians to human women. It is unclear to him why Lucifer send a demon with a high sex drive to protect young beautiful women but he does his job. Unfortunately, his charge, the beautiful Alia is always putting herself in danger and this time he wants to send her a message.

Alia is shocked when she is attacked in the same alley she has walked through many times, but even more awed to meet her rescuer who says he is her guardian, a demon guardian. She is unsure what that means, but she does not mind a guardian – especially if he looks like this one.

Bale is stunned by the visions in Alia’s head, but worse than that he finds he wants to make her dreams come true. He knows there is no rule about touching his charge, and he never thought he would want to, but it all it took is one kiss. Now what? How can a human and demon be together when they are from two different worlds? Can Bale and Alia find a way to be together, or will they forever be separated?

In his role as a guardian demon he has always tried to not interfere in his charges’ life. His Monica has horrible taste in men, but this one has gone too far.

Monica is tired of dealing with jerks, but this time she picked one that just may kill her. When a sexy man steps in to help her out, she does not care if he is blue.

Alexio has no idea what to do with Monica after saving her, but he should have never brought her to hell. Monica wants Alexio no matter where it is, but he is determined to save her; so how can she convince him that she would live in hell just to be with him?

Larissa is saved by a man she knows the is the one meant for her even if he is a demon from hell. When her master begins to share his toys with her, she decides hell is the place to be.

When it comes to the future, Larissa knows she must return home because she cannot give up everything for someone who has said he could never love. Rorlan has to find away because an eternity without Larissa seems unbearable. After days of being without Rorlan, Larissa knows she needs Rorlan and could ever live without him; hell is looking more appealing every day.

Dominguez is a demon known for his control. There is one who challenges his control and when Amara says I want you, all his control flies out the window and in losing control, he gets her pregnant.

Amara is shocked not only to find a man who makes her feel like no other, but that he is her demon guardian. If that was not enough, he tells her that he got her pregnant and then left.

Dominguez is determined Amara and their child would live in hell with him, but once he gets her there another is determined to make sure she never wants to stay. Can Dominguez save his woman and child? Will Amara run after being poorly treated? Maybe hell is no place for a human.

Aires is in love with his charge, but so is another. He is determined to keep her for himself but fate may have a different plan. When he finds her in the arms of another, he truly knows what being in hell feels like.

Della loves Aires like no other. Just when she thinks she has her happily ever after she finds herself in hell without the man she loves.

Aires is devastated when he loses the love of his life to another. When he discovers appearance can be deceiving and he has his Della back, he loses her forever because maybe she is better off with a demon other an him. Can Della convince Aires that the only demon she wants to spend an eternity in hell with is him, or will he throw it all away out of fear?

I found each story full of love and wonder. The writing keeps the reader moving from one story to another because even though all were tied together, they were unique in the characters. I enjoyed the story and the characters.  Demon Guardians is a surprisingly romantic and loving story set in hell.