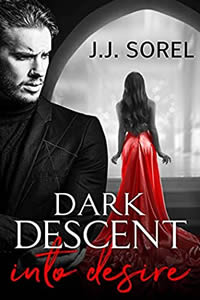 Penelope Green is an artist and student who has grown up in an environment where she almost raised herself while her mother was a heroin addict. At least she had her friend Lilly and her brother Brent who she leaned on when it was really bad. Now that she is an art student she also has Sheldon, or Shelly, another student she has formed a friendship with to lean on as well. For the most part she has had a sheltered life, at least when it comes to dating or relationships; she is still a virgin at 23. Lilly has found a place that lets girls sell their virginity to the highest bidder and wants to do it so she can get enough money to open her own salon. She tries to get Penelope to go along with her, but she only agrees to go for moral support, not as an auction item. This is where she first lays eyes on Blake Sinclair.

Blake Sinclair is rich, single and darkly handsome and he does not do relationships. He also accompanies his friend James to the “Cherry Orchard” but after seeing that many of the girls appear to be underage he is ready to go. He stays because he only saw one girl he would consider, but she never comes out to be bid on. Later on he goes to an art exhibit and sees her again. He buys her art that was on display and for sale and has the gallery owner introduce them. Penelope is very standoffish because she thinks he is the type of guy who buys virgins and she also saw the majority of the girls that had been there did not look old enough. Blake continues to pursue her with an intensity she has trouble resisting.

Blake and Penelope start out as more of a friends with benefits, and as he opens up more and more to her his obsession with her morphs into real feelings. They have to deal with someone from his past who he finds out is associated with the virgin selling and vows to take him and the operation down. Penelope is worried if Blake finds out about her mother he will end things, Blake has his own issues with his childhood he does not like to share but slowly they let each other in to their worlds.

I enjoyed this book for the steamy parts. I consider it more of a contemporary story as opposed to gothic. The only gothic I got out of it was Raven Abbey when they visited Blake’s childhood home. Blake and Penelope were both characters with a lot of depth and normal human conflicts. Even the most successful gorgeous people have insecurities and hang-ups and the author included enough and not too much to keep them believable.