Coming Together by Fearne Hill 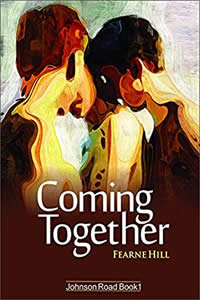 Sophie Ashworth is going out on her own for the first time.  She’s lived at boarding schools and with her military family all over the place but for college, she’s stepping out of her comfort zone.  She’s going to live off-campus in a house with two other students she’s never met and they are both guys. She arrives at the house first to find the bedrooms have been assigned by the rental agent and she got the one with the biggest bed she’s ever seen in her life.  She meets Jasper first, he’s a year or two older and a medical student.  He’s gorgeous but quiet and seems really sad. Alex doesn’t show up until the next day and she thinks he may be the most attractive person she’s ever seen in person and apparently is perfectly comfortable being barely dressed around strangers. (Who’s complaining? Not Sophie)

Both Jasper Coutts and Alex Van-Zeller both think Sophie is beautiful but Alex is the first to declare he wants to have her. Jasper keeps to himself but Sophie starts to slowly pull him out of his shell. She finds out the reason he’s so sad is his younger brother Christian recently died. Jasper is afraid to sleep in the bed because he was sleeping next to Christian when he died in his sleep.  Sophie tells him if it would be easier for him he could sleep in her bed with her.  At first, he resists but eventually when exhaustion is so bad he has to get some sleep he gives it a try and it soon becomes a habit but all they do is sleep until one night he spoons her and massages her abdomen while she is having cramps. Alex is a trust fund baby with more money than he could possibly spend in one life-time and he’s been deaf since birth and has cochlear implants and he is determined to have Sophie but she keeps resisting him because he seems like a ‘man whore” and she doesn’t want to join the parade but once he kisses her, really kisses her, her will power is losing strength.

Sophie doesn’t understand how she could possibly be falling for both Jasper and Alex.  They are so different but she is developing serious deep feelings for both guys.  She also thinks there must be something wrong with her for wanting both of them.  As the term progresses they all grow closer as a group, the guys have let each other know they are interested in Sophie but neither guy wants to hurt the other guy either.

I enjoyed this book so much I’ve already purchased and read book 2 (Stepping Out) and can’t wait for book 3 (Three Lives).  I’m right there with Sophie on her confusion and attraction to both guys.  They both have amazing qualities and together would make the perfect man.