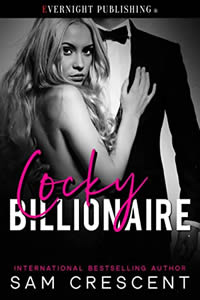 Caleb has been given the ultimatum he never saw coming; get serious about life and get married, or he will lose his seat at the boardroom table he always thought would be his. The problem is he never wanted to get married because a marriage like his parents is once in a lifetime and there is no way lightning can strike twice. So he will find a woman to play the roll for him, but the woman he chooses is unwilling to go along so he does what he thinks is best and lies.

Lauren has been working for Caleb for a couple of years. She is happy cleaning up Caleb’s home and taking care of him even if he has no idea. She does it because she believes in fairness and honesty, but Caleb has a plan which goes against everything she believes. His reasoning appears to be a good one, but she is not so sure they can pull it off. When things begin to get deeper, she comes to a point she is not sure if she wants out or if she wants the fantasy of Caleb.

Caleb will do anything to keep his place and make his dad proud. Caleb figures a white lie to get what he wants is not big deal, but when the truth comes out can he convince Lauren that he really loves her and wants her for life?

I will start by saying I really wanted to hit Caleb in the head with a teapot, but in the end, Lauren knocks him on his rear anyway. I loved both characters and the feelings were genuine and in no way is the reader not able to become invested in whether these two opposites can find a way to fit together.  Ms. Crescent is the best at providing a curb ball and then leaving it up to the reader to go along for the ride. The writing is spectacular, and the story is one I was unable to put down because all I could see was the highway to hell. Give Caleb and Lauren a try you will not be disappointed.