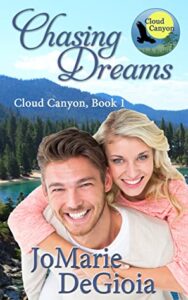 Laurel Tanner left San Francisco behind to chase her dreams. She recently lost her mother, and her fiancé Brad dumped her and closed the store he had been partners with her mother selling the clothing she had designed, claiming it was losing money and no longer worth it. She was headed to Reno to try to get some commissions for her art when on a deserted mountain road she swerved to avoid hitting a deer and her car hit the guard rail.

Forest Ranger Jack Butler was planning to spend his day off on a hike in the woods that he loves. He hears the unmistakable sound of a car accident nearby and goes to see if he needs to offer assistance. He finds Laurel sitting on the side of the road looking a bit dazed. He calls his cousin Bo from his walkie talkie to bring the tow truck and tries to determine if Laurel is injured. She tells him about the deer and jumps up and dashes into the woods to try to find it. He convinces her the deer is probably fine while trying not to stare at her natural beauty. They are not sure who is more surprised when she kisses him.

Laurel resigns herself to staying in Cloud Canyon while Bo tries to fix her car. Bo introduces her to his cousin and Jack’s sister, Chloe, who runs the café in town. Chloe is down a waitress and offers Laurel the job while she waits for the repairs along with the use of the apartment upstairs from the café. Laurel decides to take her up on it since the repairs are going to suck up most of her savings. When Jack comes to the café for lunch the next day, the attraction between him and Laurel has not gone away, if anything it got stronger and even though Laurel does not do flings she decides since she is only in town for a little while why should she deny herself.  Meanwhile, back in San Francisco, Brad finds bank statements for an account Laurel’s mother had that he did not know about.

If someone asked me how to make this book better there is absolutely nothing I could suggest. I really fell for both Laurel and Jack, as well as Bo, Chloe, and her son Josh as well as the rest of the close knit Butler family. The chemistry between Jack and Laurel feels steamy and sweet. They just fit together. They have to deal with not only Brad but also Jack’s ex-wife, Kelly. Laurel was chasing her dreams, but found out her dreams changed in the process. I am looking forward to devouring any and all Cloud Canyon books.