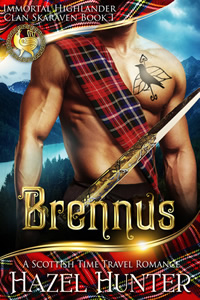 Althea Jarden is a botanist in search of new medicinal plants in Scotland. While in the field she is captured by giants, along with four other women from her time, by rogue druids to be used to power the sacred groves and is dragged back to Medieval Scotland. She is known as an ice queen thanks to her emotional detachment, but it turns out that that calm takes the form of a chilling new power once she is forced to rescue Brennus, the highlander, that crosses her path as she escapes. Now that she has met Brennus she can fulfill her promise to the other captive women.

Brennus Skaraven is Chieftain of a group of men who were bred by druids to be warrior slaves and who were not allowed to see or interact with women. Centuries after they all died protecting the druids they are brought back and asked to go after the rogue druids who had escaped, but Brennus denies them as they are no longer their slaves. He meets althea in a vision—witnessing her kidnapping and helpless to save her. However their paths cross when she finally escapes and he brings her to his home despite that he and his men have little experience with women.

A freak accident frees two rogue druids bent on revenge and destroying humanity. They kidnap althea and four other druid descendants, to use them for that revenge. Bhaltair, a good druid, uses a powerful spell to bring back Brennus and his clan from the dead in hopes of gaining their aid to defeat the rogues. Althea needs their help to free the other captives, but doing so they have to go up against the rogue druids they said they would not fight…. Brennus and his clan are free, free to do as they please including be with women on their own terms, but will they choose wisely?

This is an enjoyable spin-off of Hunter’s Immortal Highlander series; it does not need to be read first in order to enjoy it but you should if you love time travel romances. I liked the powers of the women from the future and lore used to flesh out the story; it is not like other books in this genre out there. The romance was unique with both Althea and Brennus having issues that one does not always see. She wanted control of her emotions and he did not know how to deal with women, literally. Adding an interesting twist to things was the scheming of the “good” druids.