Bound By The Orb by Kate Steele 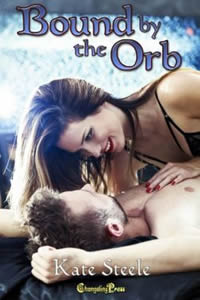 This book consists of two related but independent tales centering around The Orb and its impact on two very different couples. Since they are both romances, we can expect happy endings but each pair has to struggle past some fierce obstacles to celebrate their matches.

Chosen Of The Orb
Chosen by the mysterious powerful artifact called The Orb, Tal has become the leader to manage his unruly people. The same Orb, through its human Guardian, insists Tal must wed and allow The Orb to select his bride. Marked by his parents’ bitter relationship, Tal has no wish to marry. That is until he goes into the woods to escape the crush of prospects and meets Lira, the vital and exciting huntress. Lira is a free woman, not off to be vetted by The Orb but to market her mother’s fine horses. Still, the handsome stranger she encounters quickly stirs her libido. They cannot get enough of each other. Then Lira learns Tal’s identity and at the city, The Orb selects her! How can two unwilling partners bond for life, drawn only by the fiery chemistry they shared?

The Orb of Atrios
Many years later, a new leader has been named and he too must find a wife. Dar’s right hand man and twin brother push him to look to a distant world to find her. Meanwhile Lealah feels she is betraying modern womanhood by wanting not a career but a home and children. She meets the Guardian in a new guise and is gifted with The Orb which absorbs into her at once. Its power draws her to Dar’s world. She soon finds herself enamored with not one but two masterful, exciting men—only how can they be willing and able to share her?

Both tales read well. The characters are intriguing and believable. There is a lot of sex—almost anything imaginable a male and female can share—but it is not gratuitous or forced. Every act fits with and furthers the story. My one complaint is that the first tale jumped too quickly from a powerful conflict and ‘black moment’ to a resolution with very little explanation or reason. I needed more time and action to reach the happy ending. The second one, nearly twice as long, avoided this problem and built to a crescendo before its happy conclusion. Lovers of hot fanciful tales of other worlds will enjoy this book, both of its parts.