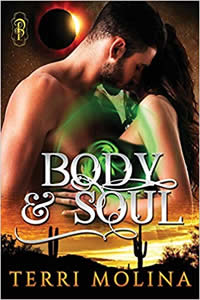 Steven Gonzales is a detective investigating a series of murders that have ritualistic signs. A fourth body turns up and he is referred to a woman in Edmondville who may know something about the ‘mojo’ bag found with the body. Steven realizes he knows this woman, Sylvia Chavez, very well. He was college roommates with her brother, Ray, and was also Sylvia’s first lover. He had freaked out when she told him she loved him and left town and went back to his mother’s home to help her while she was dying of cancer. He did not believe in magic or witches and was not thrilled this was going to be how he reconnected with Sylvia. Based on her right hook, she was not happy to see him again either.

Sylvia Chavez does not believe she is a witch, but a spiritualist who respects powers. She can read tarot cards and has made sure she is very knowledgeable about all she can find out about magic. Her brother Ray and his fiance Lexie are weeks away from their wedding. In Lexie’s past, she was kidnapped by a man named Jerry Kemp. Sylvia helped them free Lexie and took Jerry’s power from him. She recognizes the latest victim as one of her client’s and she made the mojo bag to protect her from someone she was afraid of. She needs to be involved in the case so she can find out if any of this is related to Jerry being back, even if she has to deal with Steven.

Both Steven and Sylvia are still very attracted to each other.  In the time they have been apart, Steven’s mother died, he got married, and then had it annulled. Sylvia has selectively dated but has not been with any other men since Steven. She does not want to still have feelings for him after he left the way he did, but the feelings are still there. Steven never really let himself dissect his feelings to the point that he admitted what he really felt for her. Can they work together on this case? He is the biggest skeptic of them all, especially after his mother refused medical treatment and consulted a witch for healing and died of cancer anyway,

Overall, I enjoyed this story.  I think the author got the right amount of tension between Steven and Sylvia. There is a good smattering of the paranormal without it being overwhelming or so far out to be unbelievable. The pace keeps you interested and there is no slow point that lets you get distracted.  I cared about the characters as well as the murder investigation being solved.