Behind A Moonlit Veil by Tabetha Waite 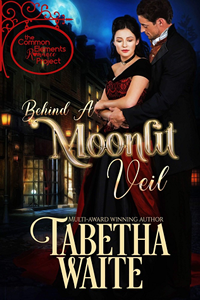 Amaris is kept a virtual prisoner by her father, a doctor, who insists her health is too fragile for any exposures or excitement. She is often subjected to horrific “treatments” and threatened with confinement in an asylum if she resists. Finally fate takes a hand when a surprising young man enters her sterile life.

Jackson, once a Scotland Yard detective, although of lesser nobility, barely survived the shock of his new bride’s gory murder on their honeymoon. When he learns of the ghastly attacks by a violent serial killer, he is determined to assist. He cannot bring his wife back and may not find her killer but he must try. His unofficial supervisor sends him to consult a noted physician on some of the macabre details of the slayings. There he meets and is soon enthralled with that doctor’s lovely daughter.

Two terribly wounded and fragile people, Amaris and Jackson recognize kindred souls in one another. Only Dr. Maxwell’s lust for a noble patron in the person of Jackson’s uncle forces him to allow the pair to socialize. Jackson soon determines Amaris is not ill at all but bound in an intolerable captivity. His main goal then becomes her rescue. Will they be able to break her free and share the life and love they both need?

I almost believe in time travel now! Surely the author has actually visited Victorian London. Ranging from delicate aquarelles of the lovers to harsh Hogarth-style portrayals of gritty life, she creates a vivid and absorbing drama. Both the lead characters win one’s sympathy from the first while the many evil villains send chills up your spine. Modernism only creeps in when the reader learns Amaris’s “treatments” are actually brutal molestation. They could come right out of today’s news although such were actually practiced at the time of “Jack the Ripper” to treat “hysteria” in young women. This book is highly recommended for emotional power, historical authenticity and simply being a darn good read!