A Cowboy’s Salvation by Megan Ryder 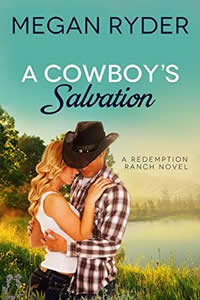 Losing first her grandmother and then her mother when she was twelve, Tara Rawlins was even more devastated when her father promptly sent her off to boarding school. Even though some of her mother’s disdain for ranch life had rubbed off, she was now left abandoned and adrift. When she returned for brief visits, she found her father had taken in three teenage boys as fosters which meant her place there was now closed. To survive, she built her own world and future including a bad marriage and a career in interior design with a new home in San Francisco. Then the call came—her father was dead. 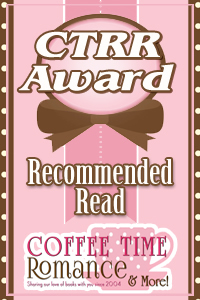 West was the first of three boys to find a new lease on life when rancher Douglas Rawlins took them in as foster kids. All three integrated into ranch life and almost became the sons he’d never had. He made it clear Tara was off limits on her increasingly rare visits and West soon classified her as a spoiled princess who took the money her father poured into her education and privileged life for granted, seemingly treating him with contempt and disdain. The older man’s sudden death forces him to deal with her when she returns for the funeral and estate issues.

Beginning from her arrival in Montana, Tara and West clash. He is surprisingly kind and protective at times but also adamant business as usual will continue on the Rawlins ranch. Then they learn Douglas’ will has divided ownership into four equal shares among them. The three men refuse to even consider selling but Tara finds the finances are shaky and she must put her life on hold while this sorts out. Meanwhile the beginning sizzle of attraction between her and West explodes, adding a huge complication.

What a powerful and moving story! I sympathized with both Tara and West and felt their pain from the bitter misunderstandings and youthful trauma both had endured. Their explosive chemistry almost set the pages ablaze but their personalities and goals still scratched like sandpaper so I wondered how they would ever work things out. Plenty of heat, bunches of angst and vivid western ambiance. What is not to love? This book appears to be the start of a series, Redemption Ranch Romances, titles and release dates TBA.