Where Do Ghosts Come From? Plus Giveaway!

Where Do Ghosts Come From?

Hello everyone! I’m thrilled to be here for the October “Book Brew,” where we’re talking ghosts, ghouls, and all things spooky. My debut novel, Hereafter, is a contemporary fantasy about a woman stuck on earth as a ghost, searching for a way to cross over to the afterlife, so, Halloween is definitely right up my alley.

The first question I always get is whether or not I believe in ghosts and/or whether I’ve had a near-death experience. All I can say is that I don’t know if I believe in ghosts, but I have had things happen to me that I can’t explain (here’s a post I wrote about my house and here’s one I wrote about being haunted by a cat). I’ve also talked about the fact that I almost drowned when I was six and that the drowning scene in Hereafter is taken directly from my memory of that experience—the sounds, the colors, the light, the sensations, all of it.

However, the truth is that the inspiration for Hereafter is actually my fascination with mythology, especially the origins of myths. Myths and legends change over time, they get embellished or updated to reflect modern values and we often forget the “real” story behind the myth. At some point, I started wondering, “What if all these stories of the afterlife were based on fact—what if they were true?” and Hereafter was born.

One of my favorite parts of Hereafter is the way in which I explain some strange phenomenon that I’ve noticed in real life; below is an excerpt from the story, with an example of what I mean (Irene is a ghost and because she died in her car, her car is also “ghostly”):

That’s odd, she thought with a flicker of unease. There’s no way they could have seen me. Yet, it seemed strange that they hadn’t gone until after she did.

At the next intersection, as Irene stopped at the stop sign she glanced in her review and was alarmed to see a car approach from behind. Irene hit the gas and then, just as quickly, hit the brakes as a car zipped across the road in front of her.

She hunched her shoulders and shut her eyes, bracing for impact as the car behind drew up. She waited for the crash, but it never came. Cautiously, she opened one eye and looked in the rearview. The other car had stopped several feet behind her.

A third car had stopped behind the first, and the driver, apparently confused as to why the first driver had stopped so far from the intersection, now tooted his horn. The car behind Irene began to creep up, and Irene hit the gas without a second thought, wanting only to get while the getting was good.

The living see what they want to see, Mrs. Boine’s voice echoed in her head.

Irene thought about all the times she had seen drivers leaving large gaps between themselves and the next car, especially in stop and go traffic, and she had often wondered why the other driver didn’t move up. Or when cars would start to change lanes on the highway only to jerk back into their original lane for no discernible reason. Or people, standing in line, leaving large gaps between themselves and the next person. Or every time she had circled a packed parking lot looking for an empty space, and everyone seemed to be bypassing this one primo spot. She’d wondered why everyone else had passed it by, but then so would she.

She realized now it must be the dead. Subconsciously, the living could sense them, enough to avoid walking into them, sitting on them, or even running into them with cars. The living didn’t want to see the dead, but, apparently, they did want to avoid them.

So there you have it –next time you pass an empty parking spot that no one seems to be parking in, maybe you’ll look at it a little differently. 🙂

What about you? Have you ever had a strange experience that you couldn’t explain? Leave a comment for a chance to win your choice of print or ebook copy of Hereafter! 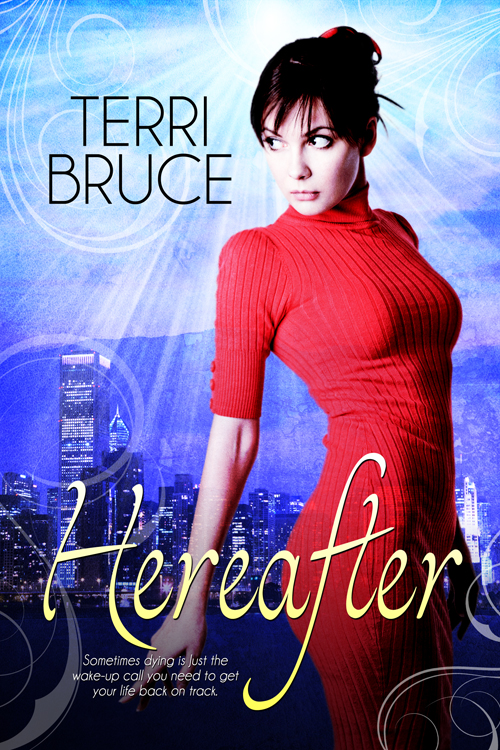 Why let a little thing like dying get in the way of a good time?

Thirty-six-year-old Irene Dunphy didn't plan on dying any time soon, but that’s exactly what happens when she makes the mistake of getting behind the wheel after a night bar-hopping with friends. She finds herself stranded on earth as a ghost, where the food has no taste, the alcohol doesn’t get you drunk, and the sex…well, let’s just say “don’t bother.” To make matters worse, the only person who can see her—courtesy of a book he found in his school library—is a fourteen-year-old boy genius obsessed with the afterlife.

This sounds suspiciously like hell to Irene, so she prepares to strike out for the Great Beyond. The only problem is that, while this side has exorcism, ghost repellents, and soul devouring demons, the other side has three-headed hell hounds, final judgment, and eternal torment. If only there was a third option…

What people are saying about Hereafter:

"So many paranormal's have been done over and over. The same 'ol thing. Hereafter is a rejuvenation of the genre. Something different! Finally!" ~Mary, The Sweet Bookshelf

"5 out of 5 stars…What a book. Wow! To sum it up – witty, sarcastic, funny, smart, and a good book to curl up and read until you're too sleepy to see the words." ~Caterina, Amazon Review

"Readers looking for a lighthearted book that still touches on some serious themes or for a novel with fantasy elements that doesn’t feature a sexy vampire huntress or a paranormal detective agency might try Hereafter." ~Laurie, Bay State Reader Advisory

“5 out of 5…This book is so good that I can't wait to make time to reread it. I highly recommend it. Not what I expected, in fact much much more. Do yourself a favour, and go out and get it-now.” ~Mallory, Mallory Heart Reviews

Available in print and ebook, wherever books are sold, including: