I have a real love of the paranormal. My The Vampire Guard series is a spin off of The Sleepless City paranormal romance series. I co-wrote The Sleepless City with Anne Barwell. We alternated books, she wrote Shades of Sepia and Family & Reflection and I wrote Electric Candle and Shifting Chaos. Each book focuses on a different couple in the found family they’ve created. All four books are available in eBook, paperback and Kindle Unlimited.

So, soulmates! One would think having found your forever true love is the path to happiness and romantic bliss. Jonas Forge is a 200 plus year old vampire. He’s a detective, kinda grouchy but when you get beyond the gruff exterior he’s got a heart of gold. Forge likes his life, he’s happy and surrounded by good friends. He knows about vampires and soulmates. He doesn’t have one, but he’s got a man he loves, who loves him and they’ve been together for over 150 years. Forge’s police partner, Lucas Coate, is a werewolf, the brother Forge never had and the forensics specialist. Along with another vampire, Simon, they protect their town from supernatural threats as well as the human variety. Yeah, life is good.

Then his world is upended.

Forge’s soulmate falls, literally, down into his life. They discover how complicated being bonded and forever love with a fated mate is.

The thing is, Forge has been a vampire for most of his life. He’s knows a few things about how they work. He’s pretty good at being a vampire. Forge’s soulmate is another story. He’s brand new to being a vampire and all he knows about what he’s become he’s learned from graphic novels and movies. The reality is a lot cooler and far more complex than pop culture.

Oh, yeah, I forgot to mention there’s a serial killer on the loose and Forge is hot on its (yes that’s right the killer is an it) trail. At the same time that killer’s sights are set on Forge and his soulmate!

If you like fated mates that aren’t immediately in love and perfect for each other, you’ll love Electric Candle! This pair of soulmates have to learn to become truly bonded. 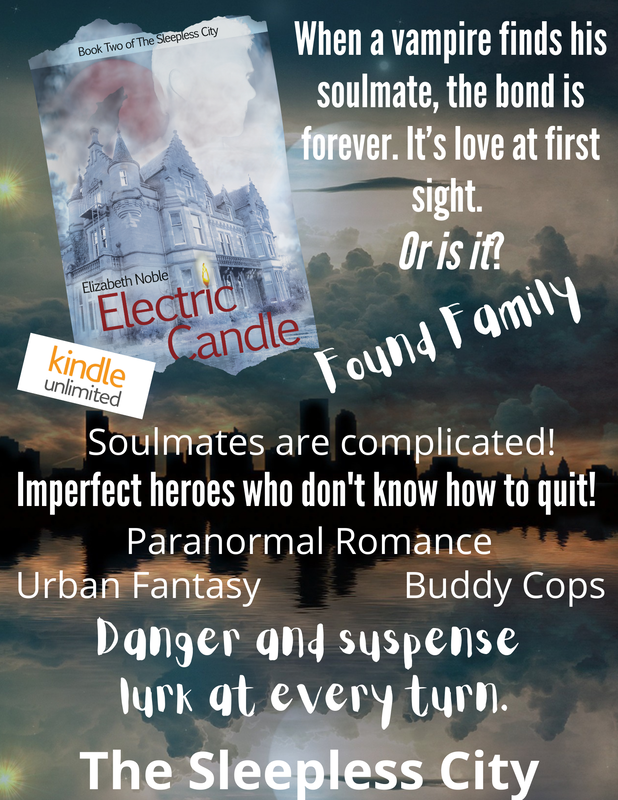 Blair decided to experiment. Crisscrossing the store, he covertly glanced at the man every few seconds. With each of Blair’s movements, the man shifted his weight or turned his head, clearly keeping Blair in his sights.

Blair tried to memorize the stranger’s features without being obvious. He had sandy reddish hair—a much lighter version of Forge’s very dark mahogany—that was neatly trimmed with a stylish cut. Thanks to vampire vision, he could see the guy’s eyes were dark blue, very unlike the bright, vibrant blue of Forge’s eyes. Blair pulled a shirt off the rack and pretended to scrutinize it by holding it out toward the light from the window. The guy was taller than Blair, but not as tall as Forge. He looked in healthy shape, but not overly athletic, and wore glasses with brushed pewter frames.

A month ago, Blair would have found this man very attractive. Now all he could do was compare the man to Forge and wasn’t surprised when Forge’s features were much more preferable.

He returned the shirt and moved across the store, rifling through packages of socks, then picked out a pair of sunglasses. A quick glance over his shoulder confirmed the man was still watching him like a hawk. Blair made his purchases, putting the sunglasses on as he left the store, hurrying past the man and making sure not to look at him. Two doors down was an outdoor apparel store. Blair ducked in and again, the man loitered outside. This store was two floors, so after spending a few minutes browsing the first floor, Blair proceeded up the steps.

The man stepped inside and stayed on the first floor, where he would likely have a good view of the second floor. Blair picked out a denim jacket. On a table near the stairs was a locked display of hunting knives. Blair considered buying one of them.

After purchasing the jacket, Blair decided to go to the local electronics store. Being followed and not having a phone was freaking him out. Good selection or not, Blair needed a phone. As he walked, he kept glancing around but didn’t spot his follower. The store, though small, was well stocked. Blair got caught up in examining his options and started when he felt someone behind him.

Blair turned, expecting a salesperson. Instead, it was the man who’d been following him. “Are you knowledgeable about these things?” the man asked, a smooth smile warming his face.

“I… yeah,” Blair said. The guy looked geeky, but he wasn’t or he wouldn’t have to ask a stranger in a store about a smartphone.

Human bodies make a lot of noise. Forge’s off-the-cuff statement screamed in Blair’s head. Pay attention to what a body does. There was the distinct sound of fluid rushing through the man, but no heartbeat. He gave off none of the heat a vampire, human, or werewolf would have, though it varied from creature to creature. Moose was hotter than them all.

“I think these people work on commission. Ask them.” Blair pushed past the man. He’d need ID to get a phone activated anyway.

Blair was at the store exit when the thought hit him that the man hadn’t drawn a breath. Or exhaled. He hurried from the store to the parking lot. Blair unlocked and scrambled into Lucas’s Jeep. He saw the man sitting on a bench not too far from the lot.

Ben had written down directions to the police station. Blair glanced at the paper as he drove. Half a mile from the electronics store, the man was standing at a street corner, watching the Jeep. Blair’s heart was racing in his chest by the time he reached the police station. The enclosed garage had a big sign over the entrance informing him authorized personnel only. Blair doubted having sex with a detective gave him authorization, even if he was said detective’s soulmate.

The visitor’s lot was out in the open, between the main building and the employee parking garage. There were security cameras everywhere, and Blair wondered if he was tense enough to show up. He spotted the man on the sidewalk in front of the station. Blair hurried up the steps and into the building. Once inside he took a deep breath and forced himself to calm down.

There was a desk with thick glass separating it from the room Blair stood in. He stepped up to it and smiled at the officer on the other side.

He hadn’t done anything wrong, or broken any laws, and still he was nervous when he asked, “Is Detective Forge here? Or Dr. Coate? I’m a friend, Dr. Coate lent me his Jeep. Sorry to bother them at work.”

Blair would clearly never make a good criminal, he blathered out everything.