I have a series of romantic suspense thrillers. Each book features an MC in a different branch of United States law enforcement. Jewel Cave, Gone Away and Bait are also wilderness thrillers and take place in the Black Hills. I will be continuing the series and had hoped to get another out this year, but it looks as if it’ll be next year.

Every life is a circle, and sometimes those circles connect and overlap in unexpected ways, even if the patterns they form aren’t obvious at first glance.

Past and present, from the wilderness to small towns and cities, the greedy and evil seek to exploit the vulnerable. The brave men of law enforcement fight to protect the innocent and punish the guilty—but they’re not alone. Men from all walks of life are called to stand beside them and solve these mysteries. Along the way, lives intertwine as couples are reminded that one thing makes the struggle worthwhile: love.

Here’s an excerpt from A Barlow Lens which is on sale this month for $2.99 for the ebook and $6.99 for the paperback. The entire series is also available in Kindle Unlimited. 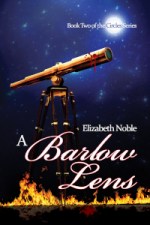 Digging into history can turn deadly.

Wyatt Harig and his partner Vladimir ‘Val’ Mihalic are busy planning their wedding when Wyatt’s old friend asks him to investigate the mysterious death of her uncle, Tom Manning, in a fire back in 1927. Back then men were silent, tough, and expected to marry nice girls.

Working with Val, Wyatt digs up clues uncovering the truth behind the tragedy. When Tom met Philip in a speakeasy outside Cleveland, Ohio the spark between them was instantaneous. They fell hard and fast for each other. However, with Philip working as a beat cop and Tom as a schoolteacher, their relationship being discovered meant the end of everything.

As the story of Tom and Philip slowly reveals itself, and Wyatt and Val realize nothing is as simple as they originally believed. While their trail heats up, an old enemy of Wyatt’s decides he’s waited long enough for revenge. Wyatt’s life before meeting Val catches up with him and the results could prove fatal.

All too soon it was time for them to leave. They walked out together. The wind was howling and whipping across the walkway, and the snow fell hard enough Tom could barely see his hand in front of his face. He flipped up the collar of his overcoat and turned to the side far enough to smile at Philip.

Tom rubbed his hands together and buried them deep into his pockets. “Me, too.”

“We’re gonna hafta be careful so no one….” Philip trailed off.

“I’ll wait and be ’bout ten minutes after you.”

“We should go separate routes,” Tom said and sighed. He’d never traveled back this late, but it was worth it.

Philip shook his head. “Na. I’ll stick behind you. Roads aren’t safe this late. We’ll watch out for each other that way.”

Tom nodded. No one had ever done anything like that, cared about him that much, not since he was a boy. “Thank you,” he said quietly.

“I only have one night off. Meet ya here next week?”

Tom nodded. “You bet. I live on Triskett. There is a diner—”

“By the church. Best pie in West Park.”

“Yes, that’s the place. I eat there most days,” Tom said.

A few days went by, then came the morning Tom sat in the diner having coffee and eggs before it was time to begin classes. A gust of cold air accompanied the bell over the door jangling. Normally he didn’t pay much attention to the other patrons, but this time the newcomer sat on the stool beside his and nudged his elbow.

“Hey, buddy, mind sharing the paper?” Philip was dressed in his police uniform. He dipped his chin at the copy of the Cleveland Press on the counter in front of Tom. Tom turned his attention back to his cup of coffee. It was difficult acting uninterested with his cock twitching in his trousers and his heart doing double time in his chest. “Sure.” He slid the paper over across the counter until it rested between them.