As well as writing urban fantasy/paranormal I also write historicals. The books I have out at present are set in WWI/1920s and WWII, but I am planning to write others with a mystery and/or supernatural bent, with a bit of a crossover. I love books that are set in one big universe so tend to write the same way.

Simon from The Sleepless City series does cameo in On Wings of Song, and has a blink and you miss it mention in Echoes Rising. After all he was there at the time…

All of my historicals are available through Amazon, in KU, and in paperback. 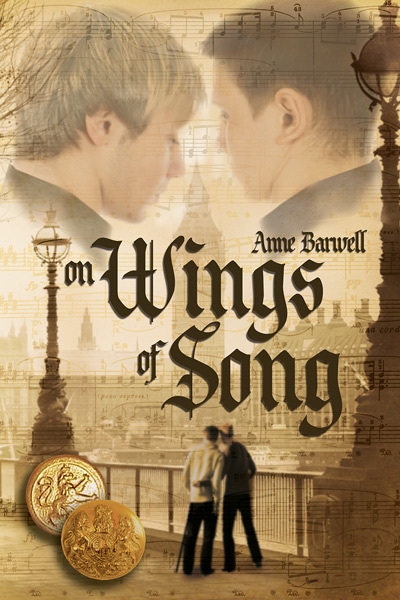 Six years after meeting British soldier Aiden Foster during the Christmas Truce of 1914, Jochen Weber still finds himself thinking about Aiden, their shared conversation about literature, and Aiden’s beautiful singing voice. A visit to London gives Jochen the opportunity to search for Aiden, but he’s shocked at what he finds.

The uniform button Jochen gave him is the only thing Aiden has left of the past he’s lost. The war and its aftermath ripped everything away from him, including his family and his music. When Jochen reappears in his life, Aiden enjoys their growing friendship but knows he has nothing to offer. Not anymore.

Author’s note: This story was originally released by another publisher. This edition has some added content, and uses UK spelling to reflect its setting.

A game of cat and mouse across war-torn Europe.

This series is set in occupied Europe during WW2.

Doktor Kristopher Lehrer is a scientist working on a top secret project in Germany. When his illusions are shattered and he discovers what the Nazis plan to do with his work, it isn’t long before he is on the run with both the Gestapo and the Allies after the plans he carries.

Echoes Rising follows Kristopher and Michel (the undercover Resistance agent sent to watch him), and the Allied team as they attempt to stay one step ahead of their enemies and reach safety.

It’s a mix of friends to lovers, and enemies to lovers romance, plus spies, and a good sized dollop of action/drama.

Complete their mission or lose everything.

For the team sent by the Allies—led by Captain Bryant, Sergeant Lowe, and Dr Zhou—a simple mission escalates into a deadly game against the Gestapo, with Dr Lehrer as the ultimate prize. But in enemy territory, surviving and completing their mission will test their strengths and loyalties and prove more complex than they ever imagined.

Author’s note: This is the third edition of Shadowboxing. The first and second editions were released by another publishing house. This story has been re-edited, and uses UK spelling to reflect its setting.

Who do you trust when no one is who they seem?

Fleeing German physicist Dr Kristopher Lehrer and his lover, Resistance fighter Michel, are caught up in an Allied bombing campaign. Separated from Michel after discovering an injured RAF pilot in the Black Forest, and pursued by the SS for the information he carries, Kristopher is frantic to reunite, unaware that Michel has been recruited by the Allies for a rescue mission.

Time is running out. The Gestapo is closing in. How can they decide who to trust, when the dagger pointed at Kristopher’s back could be wielded by a friend?

Author’s note: This is the third edition of Winter Duet. The first and second editions were released by another publishing house. This story has been re-edited, and uses UK spelling to reflect its setting.

What if those who stand by you are the ones who betray you?

Sometimes the most desperate struggles take place far from the battlefield, and what happens in secret can change the course of history.

Victory is close at hand, but freedom remains frustratingly just beyond the grasp of German physicist Dr Kristopher Lehrer, Resistance fighter Michel, and the remaining members of the team sent by the Allies—Captain Matt Bryant, Sergeant Ken Lowe, and Dr Zhou Liang—as they fight to keep the atomic plans from the Nazis. The team reaches France and connects with members of Michel’s French Resistance cell in Normandy. Allied troops are poised to liberate France, and rescue is supposedly at hand. However, Kristopher is no longer sure the information he carries in his memory is safe with either side.

When Standartenführer Holm and his men finally catch up with their prey, the team is left with few options. With a traitor in their midst, who can they trust? Kristopher must become something he is not in order to save the man he loves. Death is biding his time, and sacrifices must be made for any of them to have the futures they want.

Author’s note: This is the second edition of Comes a Horseman. The first edition was released by another publishing house. This story has been re-edited, and uses UK spelling to reflect its setting.